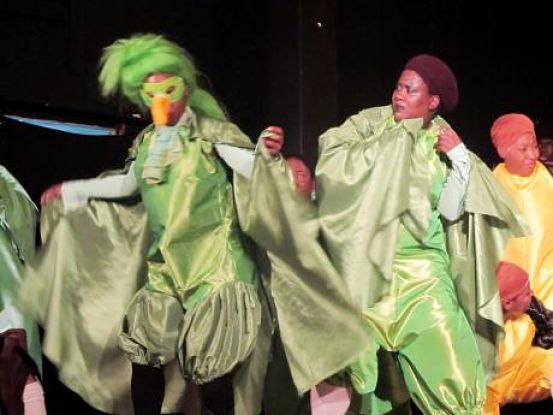 FOWL PLAY: Cast members in a lively scene from the song-and-dance production.

They say birds of a feather flock together, and that’s one of the major points brought home in the LTM’s new pantomime, Runeesha and the Birds, a visually grand family musical that manages to combine island folklore with catchy and lighthearted tunes and a sturdy production design into one entertaining package. The show is by no means without fault, as the story takes a while to heat up and the acting performances are inconsistent for the most part. But at its best the show is buoyed by the magical spirit of Caribbean life and the timeless appeal of the animal kingdom given the song-and-dance treatment.

This time around, our heroine is Runeesha (Antonette Perkins), a bright and talented young athlete with got a good head on her shoulders, who’s training for the Big-Lympics. One day her running takes her through the Bird’s Nest, a beautiful colony of avian splendor that’s averse to human interference. But king of the hill Doctor Bird (Adrian Harris, one to watch) takes a shining to Runeesha, and before long they become fast friends – much to the concern of her boyfriend and training partner Champ (Shama Reid) and some of the other birds who occupy the space. They don’t fancy intruders. 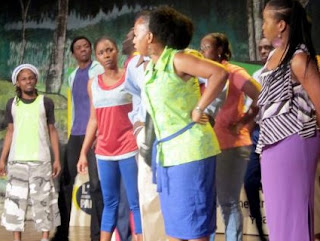 Training is hard work but Runeesha has the full support of parents Sam (Ray Jarrett) and Merlene (Nicole Taylor Thompson) and a fierce rival in Jimbilin (Latoya Newman) who watches her every move. Runeesha and Jimbilin are not the only two going at it. Consider posh music teacher and choir director Miss Parrot (Cecelia Smith-McCarthy) and aspiring politician Bredda Bald Pate (Kevin Halstead), whose verbal tussles provide much comic relief. The humans, meanwhile, are just as contentious as they make life as hustlers.

But when the no-good Cowbirds – Ma (Faith Bucknor) and Sonny (Jason Williams) - swoop into town, intent on wreaking havoc, birds and humans must put aside their differences and pool efforts and resources to save their community from these ruthless tormentors. What plays out is a high-energy, frequently amusing series of events that proves that writer/lyricist Barbara Gloudon has still got it – sharp wit and a bold sense of humour tempered by respect for the Jamaican language and heritage.

As with previous pantomimes, the show’s biggest selling point is its visual power. We can’t get enough of the eye-catching costuming and inventive set design. Kudos also to Miss Perkins for giving us a protagonist worth rooting for.

Director Bobby Clarke keeps the pacing fairly moderate, with things picking up some speed in the second half. In short, what audiences get is a mixed bag (village drama, a decent musical score, a lively chorus), but rest assured it’s the kind of full-bodied family entertainment that’s become the LTM brand, befitting a milestone as important as their 75th anniversary. Tyrone’s Verdict: B