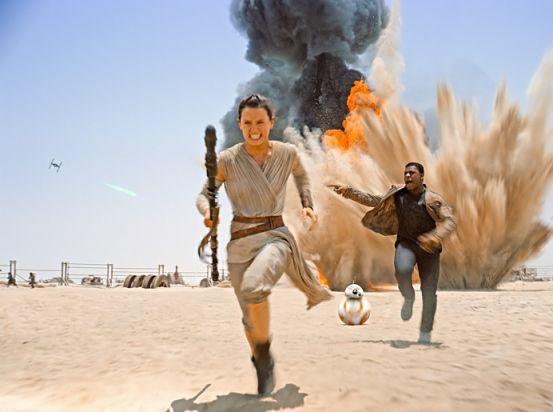 As ever, 2015 delivered an enthralling and brilliantly diverse year at the movies, with enough highlights to give you pause. Here in Jamaica, we are yet to see the lion’s share of films that are going for gold this awards season (Spotlight, Carol, Brooklyn), but we witnessed enough fantastic features over the last 12 months to populate our annual Top 10. Here they are, in no particular order:

2) MAD MAX: FURY ROAD
Full of heart-pounding action sequences and blitzkrieg intensity, this George Miller-directed spectacle kicked major butt when it landed in cinemas last year. Most interesting of all, it introduced us to a stunningly bald-headed action hero named Charlize Theron (opposite Tom Hardy), all grit and steely resolve.

3) CREED
Sylvester ‘The Italian Stallion’ Stallone and sensational rising star Michael B. Jordan get our vote for dynamic duo of the year, thanks to their terrific on-screen chemistry and intriguing father-son bond that easily helped make Creed one of the year’s undisputed knockouts. The always welcome Phylicia Rashad and Tessa Thompson co-star.

4) PITCH PERFECT 2
Director Elizabeth Banks and her army of acapella-singing starlets returned for an encore in this tuneful and amusing comedy-drama that provided a stellar showcase for the versatile talents of Anna Kendrick and Rebel Wilson, among others. A melodic screen gem.

5) THE HUNGER GAMES: MOCKINGJAY (PART 2)
The blockbuster franchise that made Jennifer Lawrence an action star got an epic and electrifying finale, buoyed by sure-handed direction from Francis Lawrence and committed performances from A-list regulars like Julianne Moore, Josh Hutcherson and Donald Sutherland.

6) THE PERFECT GUY
Sanaa Lathan made a sizzling comeback in this edge-of-your-seat thriller, as a career woman (torn between two men) whose life is thrown into a tailspin. A ferocious mix of revenge, relationship dynamics and Black Hollywood star power (Morris Chestnut and Michael Ealy costar), the film is both cautionary tale and a seriously entertaining romp.

7) STAR WARS: The Force Awakens
One need look no further than the ecstatic crowd response to the arrival of this latest entry in the iconic series to grasp its global and timeless appeal. Rousingly entertaining and anchored by an intriguingly futuristic story, ‘Force’ reaffirmed Star Wars place among the greatest cinematic experiences of all time.

8) BRIDGE OF SPIES
Inspired by real-life events, this Tom Hanks espionage drama packed all the requisite elements for a worthwhile trip to the cineplex in a respectable package: an engrossing narrative, palpable intensity and a compelling leading man still at the top of his game.

9) SPECTRE
One of the most alluring things about the 007 franchise is the utter singularity of each entry in the canon. Sure enough, Sam Mendes mined cinematic gold with this rip-roaring, continent-hopping crowd-pleaser that does serious justice to Ian Fleming’s vision, while demonstrating just how much the James Bond archetype has evolved with the decades.

10) EVEREST
A jolting and ultimately sad account of a 1996 trip to the top of the world’s highest peak that ended in tragedy, this visually stunning action-adventure saga delivered a blend of powerful, based-on-true-events storytelling, breathtaking cinematography and captivating man-versus-nature moments.

Email ThisBlogThis!Share to TwitterShare to FacebookShare to Pinterest
Labels: At The Movies, Best of 2015, Current Cinema, Flashback 2015, Talking Films