THE GIFT: Superfunny Duppy Whisperer marries the serious and the supernatural 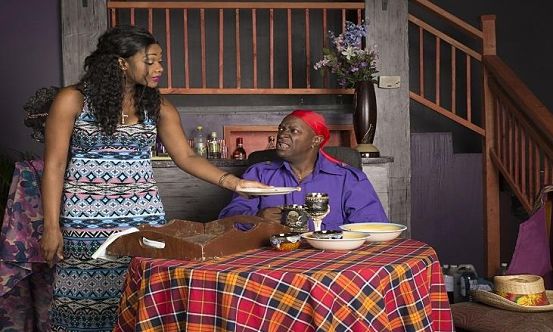 TABLE TALK: Davis (left) and Campbell sharing a scene from the production at Centrestage.

What happens when real life, deception and the supernatural collide is at the heart of Patrick Brown’s latest theatrical offering, Duppy Whisperer, a well-made and endlessly funny comedy-drama that bears more striking proof of veteran actor Glen Campbell’s knack for disappearing into a juicy role and Brown’s genius for creating such indelible characters. You can’t help but admire these two megatalents and their consistency at the top of their game.

Leading the stellar Jambiz crew once again, Campbell slips into the role of Seefus Jonas (aka Dr. Seefur), a distinguished duppy whisperer who hails from a long line of duppy whisperers. Simply put, he’s like Whoopi Goldberg in Ghost. In his line of “work,” he acts as a medium who can summon and communicate with the dead and reunite persons with loved ones who’ve passed on to the other side.

To Jamaicans, he’s simply another obeahman. But try telling that to Dr. Seefur. According to him, he’s no run-of-the-mill obeahman. He can influence the future. He has the gift.

His track record is legendary, according to the believers he’s helped and cured, but deep down he knows he’s no ghost whisperer, and his poor, frustrated wife Adassa aka Addy (Camille Davis, superb) is tired of conning people. She longs for a better life. “Him is a fraud,” she confesses one evening. “The only thing him have in common with duppy is looks.”

They’ve recently relocated to posh Waterworks in upper St. Andrew, and when nosy neighbours come a-calling that’s when things take an interesting turn. Enter Sky McGuinness (Sakina Deer), an over-the-top diva with Hollywood connections, who keeps a tight leash on her husband Coby Smith (Courtney Wilson), who claims that he’s “studying” to be a lawyer. Their fidgety housekeeper Gerda (Sharee Elise) is a bag of laughs.

Rounding out the colourful cast is pot-bellied Detective Sheg-Up (David Crossgill), who has been called in to investigate suspicious activity at Dr. Seefur’s residence. But he lands an even bigger assignment when Sky mysteriously vanishes and the truth behind her disappearance eventually comes to light. That’s when the great Dr. Seefur is put to the ultimate test.

Though the stage looks somewhat congested from my vantage point in the audience, things seem to flow smoothly for the actors, who deliver their lines with aplomb and conviction. Make that dramatic flair in the case of Sky McGuinness, who is amusingly brought to life by Deer. Co-directors Brown and Trevor Nairne allow the actors to breathe and you sense a freedom, spontaneity almost, to their performances.

Elise is the biggest surprise of all as Gerda, the character that goes through the most intriguing evolution over the course of the two hours. But, by and large, it’s the Dr. Seefur Show, and Campbell has a ton of fun transforming him into a high-powered, ego-driven, anxious, vicious, vulnerable, happy, sad, living, breathing being.