THE TALLAWAH INTERVIEW: Mike McKenley opens up about what made his father, Herb, truly great IN THE FRAME: McKenley, with a piece of art depicting his late father at Saturday's track meet at his alma mater, Calabar High. Below, a vintage shot of Herb McKenley.

Mike McKenley could talk for hours and hours about his father, the late great Herb McKenley, the pioneering track-and-field stalwart who attended Calabar High and ensured that his son followed suit. Decades later, Calabar and the McKenleys are having a reunion of sorts, thanks to the advent of the school’s McKenley/Wint Track & Field Classic, which had its inaugural staging on Saturday. Mike, now a 58-year-old giant himself and the father of a 10-year-old girl, flew in from the United States to attend and to collect an award on behalf of his father. He spoke to TALLAWAH about the moment, growing up McKenley, and Jamaica’s new wave of athletic powerhouses:

TALLAWAH: How does it feel to see your father’s legacy and memory honoured in this way?
Mike McKenley: It’s just a feeling of tremendous pride. His beginnings started at Calabar and grew into the legacy that the country now experiences. He always said that Jamaica’s greatest success lies in its people, and this field of dreams that we’ve been fortunately given is where the next generation of Herb McKenleys and Arthur Wints and other legends will rise from.

TALLAWAH: And I’m sure the rest of the family feels the same way.
M.M.: Absolutely. It’s a tremendous responsibility. The legacy is left to myself, my brother and my sisters, and it’s a responsibility that we take very seriously, in respect of his contributions to Jamaica and to Calabar High School.

TALLAWAH: Would it be a stretch to say that Herb McKenley deserves to be made a National Hero?
M.M.: I certainly believe that what my father accomplished and did was amazing because what it was about was about investing in talent, investing in people and believing that through sports they can develop and become good citizens in their communities and their country. And in keeping with the Calabar motto, which says, ‘The utmost for the highest.’ 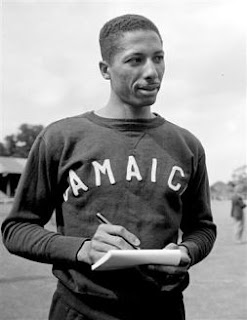 TALLAWAH: What would he have to say about Jamaica’s current wave of world-beating track-and-field superstars?
M.M.: I think he would be excited, he would be proud of what we have accomplished as a nation. He would be immensely proud of the contributions that Calabar athletes have made to the nation. He would be happy to see that what he helped to establish was being cemented and nurtured. And I believe he’s watching.

TALLAWAH: What’s life like for you these days?
M.M.: I live in Atlanta. I work in retail. I work with Giorgio Armani, which is a luxury brand. I’ve been in retail for 33 years. I worked with Saks Fifth Avenue and I’ve also worked with Neiman Marcus. So a lot of the things that I learnt at Calabar [about] commitment, focus, discipline and hard work and living up to that motto still live with me, in terms of my day-to-day experiences. I remember telling somebody recently that one of the most gratifying experiences of my life was being a young man attending Calabar. It’s been a long time. That was in the ’70s. And to see what still flourishes makes me proud, makes me feel that my father would be gratified and happy to see the sons of Rabalac flourishing.

TALLAWAH: What was Herb like as a father?
M.M.: He was a disciplinarian. He was firm. He believed that nothing should be given; it should be earned, and that anything worth having demands sacrifice and hard work. And he taught me the lesson that before I ask for anything I must be willing to help myself. And these are the things I carry on from what he has taught me and I’m now trying to pass on to my 10-year-old daughter. He was fun-loving. He could be very curious, and my sisters and brothers say I’m a replica of him.

TALLAWAH: That you’ve inherited these qualities.
M.M.: Yes, and one of the things I hope our young people understand, whether you’re a Calabar old boy or a KC old boy, is that we are Jamaicans first. We must invest in each other because that will continue the prosperity and success of who we are as a people. And that’s what he believed.