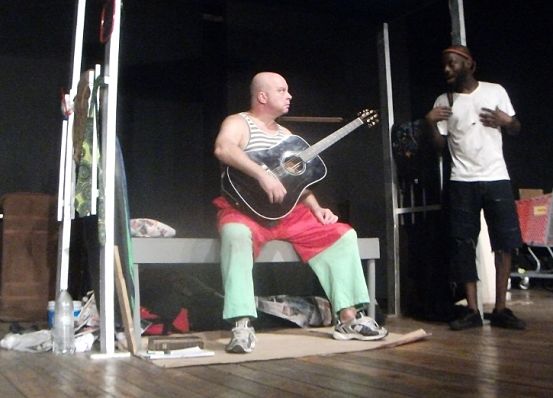 Time flies! It’s that time of year already when we normally pay tribute to the outstanding performers and productions in Jamaican theatre who could become key players as awards season heats up. As far as actors in a lead role go, it was a year of embattled lovers, conflicted fathers and no-nonsense duppy whisperers, and the list goes on and on. TALLAWAH has a tendency to play favourites, so here are five sharp performances (in no particular order) that got our stamp of approval and could gain momentum as the Actor Boy Awards draw closer:

VOLIER JOHNSON in Same Difference
After almost 50 years of delivering stage performances, Johnson still knows how to win us over with that mix of fatherly charm and riveting stage presence. It goes a long way in anchoring his knockout performance (opposite Deon Silvera and Maylynne Lowe) in Dahlia Harris’ endlessly funny potboiler about domestic drama and class relations in upper St. Andrew. Johnson at his best.

GLEN CAMPBELL in Duppy Whisperer
Dr. Seefur is easily one of the most intriguing character portraits we’ve encountered on the Kingston stage all year. Brought to full-bodied life by the incomparable Campbell (with just the right blend of menace and vulnerability), the character is all no-nonsense verve, Jamaican bravado and cheeky punchlines. In other words, classic Glen Campbell.

NICHOLAS AMORE in Saving Grace
A talented rising star who’s been on our radar since wreaking havoc in Bad Apple, Amore digs even deeper this time around. Playing an aging police veteran whose extramarital dalliances have dire consequences, Amore musters up the conviction to offer a nuanced performance fuelled by emotional depth. We consider him the nephew of acting greats Andrew Brodber and Alwyn Scott.

TONY HENDRICKS in Samson & Di Liar
He hasn’t performed for theatre audiences in ages, but Hendricks showed he’s still a force to be reckoned with. In this supremely funny comedy-drama (brought to us by rookie producer Scarlett Beharie), Hendricks played a homeless man/deportee blessed with amazing musical talent. When he forms a duo with another a down-on-his-luck drifter (played by Ricky Rowe), hilarity ensues.

DENNIS TITUS in Guilt Trip
Some of the greatest actors ever have long made it clear that it ain’t easy playing a “mad” person, but it can be loads of fun. Titus takes to the challenge with relish in Basil Dawkins’ latest effort, disappearing into the role of a son pushed to the brink by his father’s (Oliver Samuels) betrayal. To say the least, it’s Titus’ most memorable performance since starring in 2012’s Stanley Fay Pularchie & P at New Kingston’s Theatre Place.