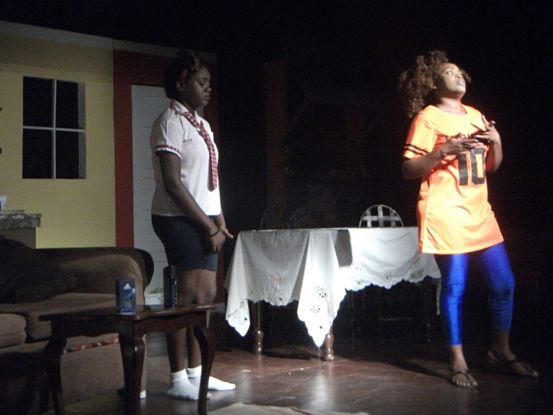 Last time, we put the spotlight on five actors whose dramatic and comedic turns on the stage we believe could morph into bonafide awards-season contenders in the coming months. This week, the ladies get their time to shine. Here, in no particular order, are five performances we found both magnetic and memorable:

DEON SILVERA in Same Difference
Silvera is no stranger to bringing vivacity and verve to the role of strong Jamaican women, and in Dahlia Harris’ side-splittingly funny comedy-drama, her Mini-Bar is a mix of unflappable warrior and thoughtful matriarch, whose maternal instincts are as macca-sharp as her ‘tracing’ vocabulary.

ZANDRIANN MAYE in Night Work
The Actor Boy winner proved she can carry an entire show on her slender shoulders, slipping into the role of an illiterate prostitute whose chance encounter with an aging man of letters (Hugh King) sets them both on a course that forever changes their lives. Maye has played the rough-around-the-edges type in numerous outings before, but here she unearths the kind of dramatic depth we always knew she had within her.

SUZETTE BARRETT in Prayer Partner
Stealing scenes opposite seasoned colleagues Michael Nicholson and David Tulloch, Barrett provided audiences with nonstop comic relief, as a revivalist sister who gets regular “text messages” from the Holy Spirit. Seriously. A solid addition to a body of work that already includes standout roles in Thicker than Water and Stanley, Fay, Pularchie & P.

CAMILLE DAVIS in Duppy Whisperer
Appearing seasonally with the Jambiz crew, Davis consistently manages to be part of the ensemble without dimming her own megawatt star power. Her portrayals are increasingly nuanced and convincing. Case in point: her compassionate turn as Adassa, a put-upon wife who longs for a better life than the one she’s got playing sidekick to her witch-doctor husband (Glen Campbell), with whom she’s constantly bickering. Ah marriage…

BELINDA REID in Force Ripe
The most intriguing thing about seeing Reid portray a monstrous mother in this heated domestic drama is how much her character closely resembles Monique’s role in Precious. We don’t necessarily share her outlook or agree with (some of) her choices, but for the most part we understand where she’s coming from, and the anger (rooted in pain and disappointment) that seems to drive her.