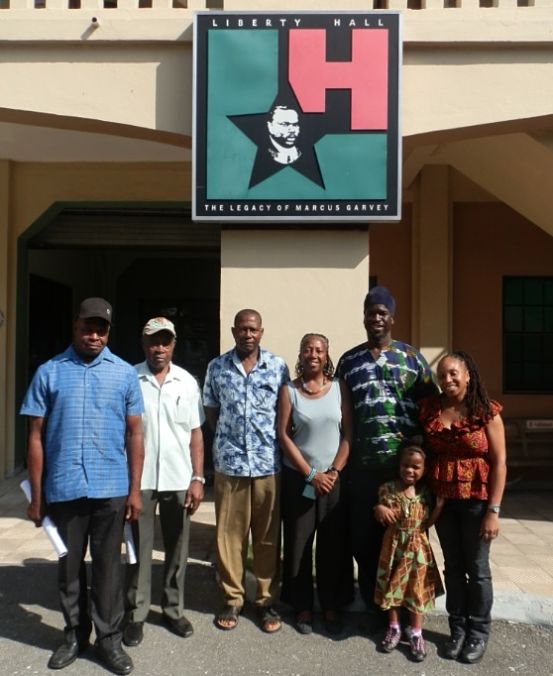 PROUD LEGACY: McFarlane, centre, and members of the Liberty Hall staff. Below, visitors making use of the resources.

The sea of green-and-white-clad primary-school students, practically blocking the entrance to the museum, shouldn’t have taken us by surprise on this sunny Thursday afternoon in downtown Kingston. After all, local schools are in the happy grip of Black History Month, and this is Liberty Hall, the Marcus Garvey landmark prominently situated at 76 King Street.

According to current director and curator of Liberty Hall, Dr. Donna McFarlane, it’s during this time of year that the property draws its largest crowds. “During Black History Month we host a lot of tours, from in the morning all the way back to evening,” she tells TALLAWAH. “We have hundreds and hundreds of children coming in almost daily.”

The people-friendly Liberty Hall that everybody now enjoys when they pay visits to learn about the life and work of Marcus Garvey didn’t start out as this appealing, technologically advanced cultural centre. Today, the enormous building houses the Garvey Multimedia Museum, a multimedia computer centre, the Garvey Research and Reference Library and a museum shop. In short, what’s on offer is a significant educational, social, cultural and intellectual centre – a living, breathing monument to Jamaica’s first National Hero.

It’s come a long way. Back in 1923, the property was established as the headquarters of the Kingston division of the Garvey-founded Universal Negro Improvement Association (UNIA). It served as a multipurpose facility that housed admin offices, a laundromat, a job placement service and even a co-operative bank. For a while, it was the centre of Garvey’s operations.

After years of ownership battles that went all the way to the Supreme Court, in 1987 the property was purchased by the Jamaica National Heritage Trust and plans were made for its reconstruction as a historical site. Pooling ideas and resources, the culture ministry, the Friends of Liberty Hall, the Jamaica National Heritage Trust and the Institute of Jamaica restored Liberty Hall to its former glory. The newly refurbished building was officially opened to the public in October 2003.

Inside, the green-and-white-clad students (who we later learn are from Ensom Primary and Marlie Mount Primary) are paying keen attention to their young female instructor, who is giving them the kid-friendly version of Garvey’s philosophies. They hang on to her every word, responding as a lively chorus to her questions.

Garvey’s larger-than-life portrait stares back at you from quite a few paintings on the walls. His teachings, in book format, look out from glass-made display cases. There are quotations of his (on posters) that you scribble into your notebook to memorize later. The rooms are dimly lit but the computer screens provide ample lighting. Inspiration is all around. Inside Liberty Hall feels like the kind of study/mini library you add to your perfect dream home.

“Liberty Hall has established itself within the community as a source of inspiration, and for that we are very pleased,” McFarlane says. “I’m very proud of the fact that we’ve been open for 12 years now, and that we serve the community around us first and all others after.”

And because there’s always room for improvement, the next phase of the modernization of this national landmark is in the works. “Soon the museum will be completely redesigned to include more interactive elements,” the curator notes. “We now have eight touch-screens, all of them dealing with the life and work of Garvey. And we also have a collection of films about Garvey that we show.”

But by June of this year, there will be more on offer. “The museum will be enhanced with a few more touch-screens and devices that will share facts about Africa, which Garvey preached a lot about – facts that students and visitors may not have learned elsewhere. We’re hoping to have all this done within the next few months, so it should be very exciting.”

For a man who was all about the Motherland, liberty and advancement, we think Mr. Garvey would have approved.