BOOK OF THE MOMENT: A fascinating new book sheds light on the talented and troubled Don Drummond 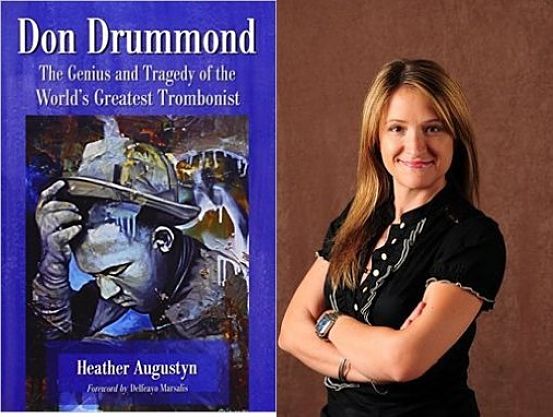 HIS STORY: "Don Drummond, like his music, is haunting," says the Chicago-bred author.

Few iconic Jamaican musicians remain as elusive as Don Drummond, the legendary trombonist, who battled mental illness and died under mysterious circumstances at Kingston’s Bellevue Hospital, at age 35, after being institutionalized for “criminal insanity,” stemming from the stabbing death of his lover, the rumba queen Margarita. But, as history attests, much of Don’s life – down to his final days – was largely shrouded in mystery. So the question remains: who was Don Drummond really and what was the true end of his story?

Chicago-born journalist and ska enthusiast Heather Augustyn gamely tackles these ‘mysteries’ with gusto in her new book Don Drummond: The Genius and Tragedy of the World’s Greatest Trombonist (McFarland Press), which was launched at the Institute of Jamaica on Sunday to jump-start this year’s Reggae/Black History Month Grounation Series (titled “Ungle Malungu Man: Musings on Don Drummond.”)

Drawing on oral history, good old-fashioned investigative journalism and relentless research, Augustyn constructs a biography that examines the brief life and massive legacy of one of the Caribbean’s “all-time greatest musical geniuses” while offering a historical narrative blended with drama, a whiff of scandal and highlights from a golden musical era. What’s more, the author weaves together the words of childhood friends, former classmates, fellow musicians, medical staff, legal counsel and teachers to enliven this odyssey into “an unusual mind.”

Addressing Sunday’s launch, Augustyn spoke about finding inspiration. “As a teenager I came to know ska music through the British incarnation. I came to love [Don Drummond’s] music and fell in love with your culture. But as I researched the music I fell deeper in love with it and made it my life’s work,” said Augustyn, a married mother of two boys (now residing in Indiana), who also penned Ska: An Oral History, Ska: The Rhythm of Liberation and Song Birds: Pioneering Women in Jamaican Music. “Each time I listen to his music I hear something new. His music is so familiar, it feels like a shadow within. Don Drummond, like his music, is haunting.”

She later added, “I also wrote this book because Roger Steffens told me that there are over 500 books about Bob Marley. I wanted to write a book about the music that inspired Bob Marley.”

Psychologist Dr. Christopher Charles said he read Augustyn’s book and uncovered a few errors of fact. But he gives her a solid B+ for the splendid effort. “A work like this is long overdue, and more books should be written about the don of dons,” said the UWI Mona-based senior lecturer, Sunday’s keynote speaker. “Heather did an excellent job of writing down the life of one of Jamaica’s greatest musicians. It’s a worthwhile contribution to the culture.”