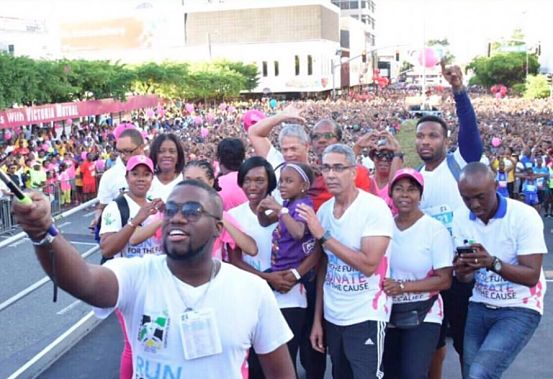 ALL ON BOARD: Members of the Sagicor team and event ambassadors share a selfie moment.

For Donovan Perkins, the most memorable moment at Sunday morning’s Sagicor Sigma Corporate 5K in New Kingston came when a few of the entertainers who were tapped to perform for the massive Emancipation Park crowd felt moved to make financial donations on the spot. “To see these artistes dip into their pockets and donate everything they had on them was a highlight for me,” Perkins, CEO of Sagicor Bank, tells TALLAWAH. “I think it shows how deeply moved Jamaicans are when it comes to supporting this worthy cause and playing a part in the fight against cancer and supporting cancer survivors.”

The entertainers, including dancehall heavyhitters Ding Dong and Popcaan (who both made US dollar contributions while on stage) represented a mere fraction of the turnout for this 18th staging of the Sagicor Sigma road race. The event pulled well over 20,000-strong to the streets of New Kingston – a merry multitude of men, women and children decked out in track suits and sneakers, shorts and tee-shirts, some proudly flaunting the logos of their respective companies, schools and clubs.

Observing the theme “Run for the Fun… Donate for the Cause,” this year’s staging raked in $43 million-plus dollars, thanks to registration fees and donations. According to Perkins, it’s the largest sum they have ever raised in the history of the 5K. How will the money be spent? “We haven’t worked out the details yet, but we will be giving funds to the Bustamante Hospital for Children and the Black River Hospital,” Perkins explains.

At least a dozen 5K road races take place in Kingston & St. Andrew alone each year, but there’s something about the Sagicor Sigma event that brings out a special kind of enthusiasm and joie de vivre among Jamaicans. By all appearances, this year’s staging certainly lived up to its slogan. “Whenever you do the Sigma run, and you complete the race, you feel like you win a million dollars,” offers Carlene Blagrove, the top female runner, who completed the distance in 23 minutes and five seconds. “I look forward to it every year. It’s awesome.”

A professional massage therapist and mother of two, Blagrove says running for the love of it is one thing but doing so in support of cancer survivors is added incentive. “I have two clients who are cancer survivors, and I know a lady who is a breast cancer survivor,” shares the 45-year-old, defending champion of the upcoming Melbourne Cricket Club 5K. “So for me it’s a worthy cause that I will always support.”

Like Blagrove, this year’s overall male champion, Kirk Brown (17 minutes and 15 seconds), says doing the Sagicor Sigma Run allows him to combine his love for athletics with lending his time and talent to a worthy cause. Plus, for Brown, a professional athlete, the event is an important yard-stick. “I’m hoping to make the Olympic team this year, so doing the race this morning allowed me to see where I’m at and where I need to improve,” says Brown, who has set his sights on representing Team Jamaica in the marathon in Rio.

Given the humongous turnout that overpopulated the Emancipation Park on Sunday morning, can the Sagicor Sigma Run get any bigger? “Well, that’s the aim,” Perkins says. “When you see a turnout like this of almost 30,000, you wonder where more people are going to be accommodated next year. But it’s a worthy cause, so we’ll figure it out. We welcome all the support.”