DESPERATE MEASURES: Tulloch’s gripping, well-acted Not My Child is no kids’ stuff 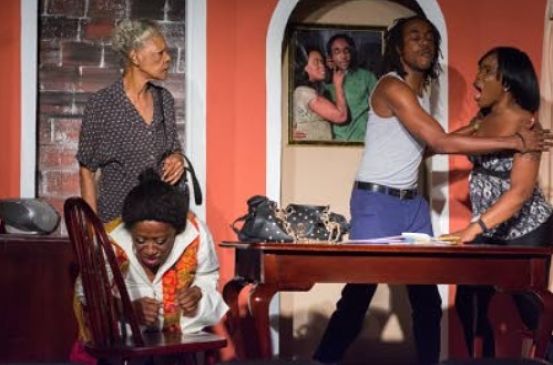 MAKING A SCENE: Murray, Forbes, Anderson and Reid during in of the play's more intense moments.

Exploring pride and prejudice, poverty and crimes of passion, David Tulloch’s Not My Child is an equally provocative and moving domestic drama that flips the script on his traditional writing style. What theatregoers get this time around includes way more intensity and riveting suspense, coupled with the fact that Donald ‘Iceman’ Anderson should take on more dramatic roles in his career. Working with the always welcome Leonie Forbes, Rosie Murray, newcomer Crystal Fletcher and firecracker Belinda Reid, the popular comic delivers a performance that deeply impresses.

Anderson is Alvin James, a well-to-do businessman who operates a thriving wholesale with his prim but very conniving wife Mary (Reid). Things are going fairly well for the Jameses (save for the occasional bickering) until Mary forces her husband to fire their long-serving housekeeper Mavis Jones (Forbes) because she’s getting “too old” to manage.

With a mentally and physically challenged daughter at home (Murray as Patience) and a force-ripe teenager, grand-daughter Diandra (Fletcher) to take care of, Mavis is blindsided by the betrayal and hatches a plan that will guarantee some semblance of justice for her and her family. As they say, desperate times call for desperate measures.

Tulloch is no stranger to weaving a compelling tale of a family brought low by unfair circumstances (see For My Daughter), but with Not My Child you get a far grittier sequence of events that culminate in unspeakable tragedy. It helps, too, that the actors take to their roles with commitment and, more importantly, conviction.

As I said earlier, Anderson gives a laudable turn as the young businessman grappling with conscience and a manipulative wife. Reid’s turn is a welcome respite from the monster she brought to life in Force Ripe last year, though Mary does have some serious fangs of her own.

Murray, meanwhile, is surprisingly spot-on as the adult “handicap” who adds to Mavis’ already burdened life. As her boy-crazy daughter Diandra, Fletcher brings grit and sass to the part of a 14-year-old who bites off more than she can chew when she takes up grown-folks’ business. And then there’s Forbes, giving yet another dynamite turn as the heroic matriarch who musters up the strength and indeed the courage to take on a she-Goliath to save her family’s future.

You can tell that Tulloch was in a no-nonsense mood when he penned this piece; there is no sentimentality or sugar-coating, as he’s delivered in the past. After all, when it comes to getting what’s rightfully yours, sometimes you have no choice but to armour up for outright war. Tyrone’s Verdict: B+