HOLNESS’ VICTORY DANCE: ‘How We Won the General Elections’ 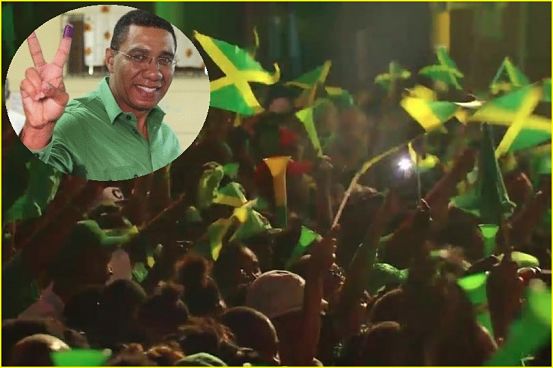 'PARTY' PEOPLE: “We will give you an accountable and responsive government,” Holness has promised his supporters.

The 2016 General Elections – the country’s 17th since the granting of Universal Adult Suffrage in 1944 – have come and gone, and Andrew Holness is on his way to Jamaica House. The Jamaica Labour Party president, who led his team to a historic 33-30 triumph over the Portia Simpson Miller-led People’s National Party (PNP) at the polls on Thursday, says his party won the keenly contested matchup because they listened to the cries and concerns of the Jamaican people and devised compelling strategies to address them.

“Our campaign was issues-based. We focused on the things that you told us were important to you. We developed plans around them, and we discussed those plans with you,” the charismatic politician noted in his victory speech in Kingston on Thursday night.

Did his attractive and well-publicized 10-Point Prosperity Plan – not to mention his headline-grabbing income tax proposal – convince and sway voters? It’s safe to conclude that it played a pivotal role, especially since it came so close to D-Day. Looking ahead, Holness is firm about delivering on those promises. “We intend to be faithful to those plans. We will grow the Jamaican economy,” he says. “We will give you an accountable and responsive government.”

So what Jamaicans can expect from the incoming JLP government, the waiting-in-the-wings prime minister makes clear, is effective change. “I make the commitment to you that your new government will not be government as usual,” Holness says. “We don’t take it that we have won a prize. We have been given stewardship of the country, and we stand to be held to account for our stewardship.”