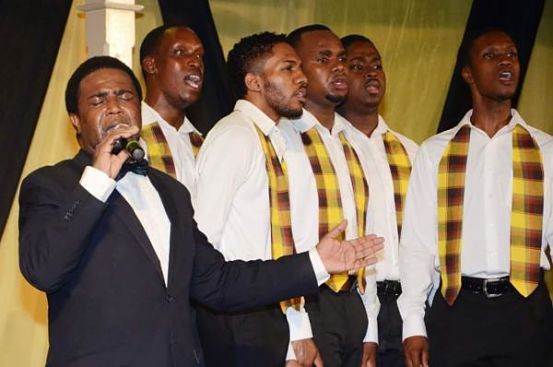 WELL TUNED: The Kingston-based Nexus Choir was among the groups making a joyful noise at Sunday's concert.

For Joseph McIntyre, the most glaring indicator of the growth of the annual Festival of Choirs, hosted annually by Kingston’s large-and-in-charge Boulevard Baptist Church, is the size of the audience that seems to hit a new record every year. Now in its seventh year, the show (which took place this past Sunday evening) had its largest turnout yet – a massive standing-room-only throng that swelled as the event progressed.

“It gets better and better every year, but this year surpassed our expectations,” the veteran director and chief organizer told TALLAWAH in a post-concert interview. “But it means that the festival is growing and can only get better in the years to come.” The lovely Mary Elizabeth Dick, dynamic wife of host pastor Devon Dick, concurs. “When I saw the persons coming in after we had already started and couldn’t find seats, it proved that what we have here is something of quality that the public is interested in, and that makes me very proud,” she said.

Festival of Choirs brings together some of the most widely acclaimed church-based and mainstream choral groups for a feast of sounds that ranges from sacred and spirituals to Jamaican folk gems and popular tunes. For this year’s staging, 12 choirs participated, putting on a show that left audience members both satisfied and longing for more.

Among the most memorable moments: The Carifolk Singers brought their trademark lively harmonies, humour, rhythmic drumming and spirited choreography to the stage, as they gave renditions of “Mango Time,” “Mango Tree,” “Dip Them Bedward”, “Great Day”, “Alle” and “Keyman.” The acapella stylings of the King’s Men Chorus (representing the Meadowvale SDA Church) also elicited resounding applause from the crowd, who favoured songs like “If We Ever”, “When I Was Sick” and “What a Mighty God”.

The Nexus Ensemble was in their element, delivering spirit-lifting classics like “Precious Lord” and “Break Every Chain”, which had the benefit of some stellar solo performances. By the time groups like the McIntyre-led Boulevard Baptist Choir appeared front and centre to perform evocative takes on “Psalm 23” and “Jah Is My Keeper”, the concert was a clear winner.

Pastor Devon Dick believes the combination of free entry to the public and high entertainment value contribute greatly to Festival of Choir’s monumental success. “Another factor is that in Jamaica most events tend to feature bands and not enough choirs, so that makes our event stand out,” he says. “We also have a mix of young choirs and adult choirs because we feel that it is important to have the children involved from now, so that when we have passed on they will continue it.”