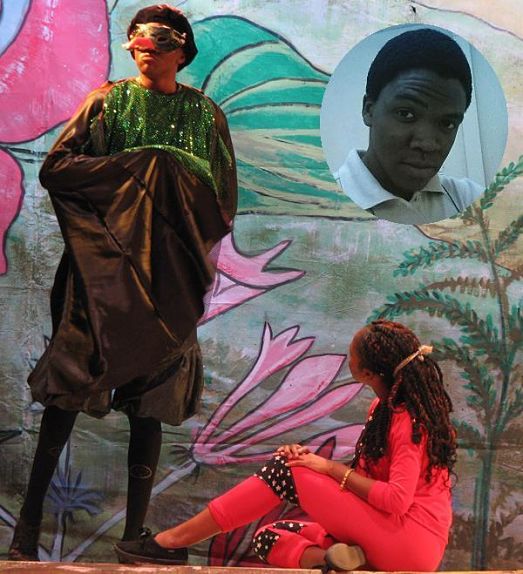 FINE FEATHERS: "Being true to your identity and your individuality is tough," admits the actor, pictured here in a scene from the pantomime.

The Pantomime Company is bursting at the seams these days with exuberant young talents, including an impressive array of on-the-rise leading men. Adrian Harris, 23, a Campion College and International University of the Caribbean (IUC) old boy, who is making his second straight appearance in a national pantomime this season, effortlessly stands out among these up-and-comers. Banking on a surefire mix of natural ability, easy-going masculinity and enormous modesty, Harris (who cites Glen Campbell and namesake Dahlia Harris among his local-theatre favourites), could have a brilliant career ahead of him. But he’s in no hurry. Instead, this son of Golden Spring, St. Andrew, is content with living in the moment and enjoying the endless possibilities. He talks with TALLAWAH:

TALLAWAH: At present, you’re among a fantastic group of energetic young men thrilling audiences in the national pantomime, Runeesha and the Birds. Why did you want to become a member of the Pantomime Company?
Adrian Harris: Actually, I didn’t decide to become a member. I was called in to help the performers on a summer production. My task was to help them get it right with the music. But before I knew it, I had an application form in my hand, and months later I was auditioning. The rest is history.

TALLAWAH: How would you describe the experience so far?
Adrian Harris: It has its ups and downs, but this experience has been very educational for me. As an audience member I’d always been curious about what goes on behind the scenes of a theatre production. So now that I’m a part of the Pantomime Company it’s been very eye-opening because I get to see how everything is put together.

TALLAWAH: In Runeesha, you play the generous and charismatic Doctor Bird. How did you get into character for the role?
Adrian Harris: It all started with going through the script to get a good grasp of the character. He has a very distinctive way of speaking, so getting the voice was crucial. And after I got the voice and was comfortable, everything just sort of fell into place. I did some research to flesh out the character because he really has to be striving to keep two worlds balanced. He also has a very caring and nurturing side, so I had to find somebody like that to mirror.

TALLAWAH: As a young man growing up in modern Jamaica, what’s one of the toughest challenges you’ve had to overcome?
Adrian Harris: There are certain stereotypes you have to deal with, like behaving a certain way or doing a particular thing, or you don’t fit in. To be yourself is a challenge, as well as dealing the expectations of others. So one of my biggest challenges has been overcoming those kinds of stereotypes and this whole idea that you have to be like the crowd to fit in. Being true to your identity and your individuality is tough.

TALLAWAH: So who is Adrian Harris away from the spotlight?
Adrian Harris: I read. I watch movies. I write. Most people tell me that I’m observant. I’m always trying to understand and learn something new, or discussing an issue that bothers me with somebody.

TALLAWAH: Is there a philosophy that guides your life?
Adrian Harris: I don’t regret any action that I have taken.

TALLAWAH: For your career as an actor, what do you see in your future?
Adrian Harris: I don’t necessarily see myself pursuing a career as an actor, but whatever I am called on to do I’ll do. In terms of giving something back to the craft, I’d love to have something of mine staged or produce a play. Can’t say no to that. I don’t believe in limiting myself to one particular thing.