THE MAN FOR THE JOB: New Chinese Ambassador to J’ca, Niu Qingbao, ‘ready to work’ 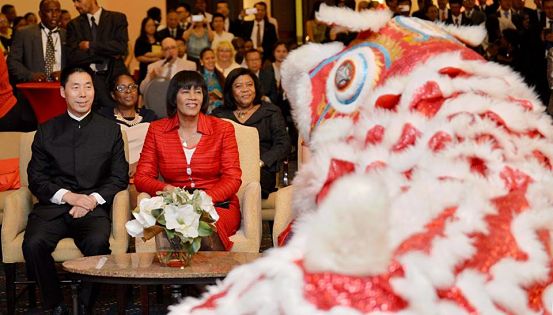 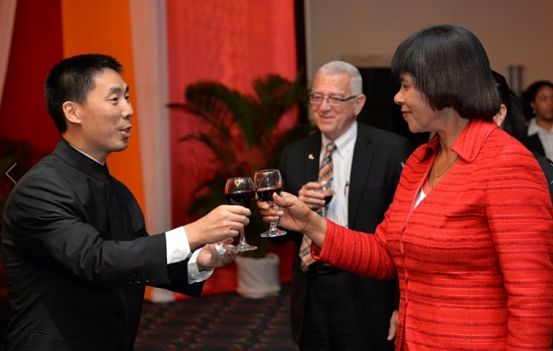 UP FRONT: Ambassador Qingbao and PM Simpson-Miller taking in the lion dance (and sharing a toast) during Friday's reception at the Pegasus.

“The priority for me as Chinese Ambassador to Jamaica is to continue implementing the important consensus reached by our leaders and to further intensify high-level exchanges between our two countries.” That’s how China’s newly installed man in Jamaica, Niu Qingbao, formally introduced himself to the sizeable gathering inside the Jamaica Pegasus Hotel’s Grand Jamaica Suite on Friday evening, during a welcome reception held in his honour – and to mark the arrival of the Chinese New Year and Spring Festival.

A youthful and quick-witted diplomat, Qingbao reminded us that, in the wake of two meetings which brought together Prime Minister Portia Simpson-Miller and President Xi Linping in 2013, there have been considerable advances in the friendly China-Jamaica partnership for common development. “The successful outcome of China-Jamaica economic cooperation is there for all to see,” he said, citing the work-in-progress North South Highway, largely funded and constructed by China Harbour, which will be officially opened to traffic in March.

More projects, Qingbao revealed, are being discussed or implemented. These include the China-aided Confucius Institute building at the University of the West Indies (UWI) Mona Campus and a children’s hospital for western Jamaica. “I will continue working to bring the China-Jamaica economic partnership to a higher level. I will also continue promoting people-to-people exchanges between China and Jamaica in areas such as education, culture, sports and health,” the ambassador promised. “This is a land of creativity. This is also a land that never says never. I’m ready to work hard during my tour, together with all friends in Jamaica.”

Prior to his arrival here, Qingbao had “already been deeply charmed by the land of wood and water.” Nanny of the Maroons, Bob Marley, Usain Bolt, Shelly-Ann Fraser-Pryce and Blue Mountain Coffee are all household names in China, he pointed out.

Qingbao says he’s been on the island for just over a month, and already he’s hooked on our brand of hospitality. “I have met with many ministers and paid field visits to several locations around Kingston and Ocho Rios,” he said. “Wherever I went I was accorded a warm welcome, which allows me to strongly feel the ardour of the Jamaican people, as well as their true affection and friendship with China. I would like to extend my sincere gratitude for the hospitality of the Jamaican people.” Among the government ministers attending Friday’s reception were PM Simpson-Miller, Sandrea Falconer and Rev. Ronald Thwaites.