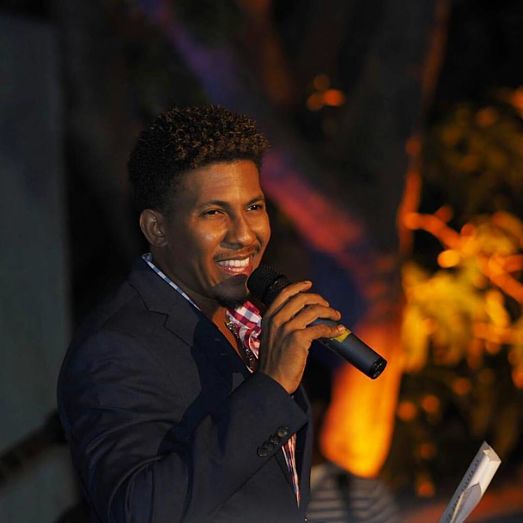 SMOOTH OPERATOR: The reggae-soul crooner addressing his captivated audience. (below) Sharing a photo-op with Stephanie.

Leave it to Mario Evon to dedicate an entire show to matters of the heart – an event that not only came together in a visually appealing and melodic package but proved unequivocally that the dude is a born entertainer. A natural. From the fantastic range of songs he selected to the dynamic chemistry he shared with his backing band, the production, wittily dubbed “Stages of Love”, was both satisfying and memorable.

Who could forget that moment when radiant songbird Stephanie, a vision in bright orange, joined Mario for a powerhouse rendition of “Endless Love” that lingered long after their final notes? Or the jaw-dropping precision and vocal dexterity that on-the-come-up singer Jordanne Patrice contributed to their evocative take on the Rihanna smash “Stay”? 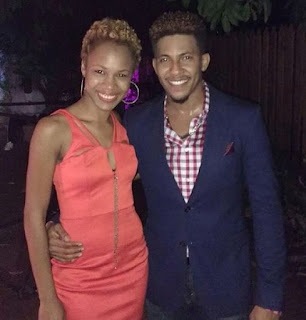 Stages of Love was an overlong production but, thankfully, it yielded enough highlights to keep one’s eyes and ears glued centrestage. The man of the hour(s) set the mood with sublime renditions of original cuts like “Soul Teck”, the beautifully written “Never Let You Know” and “Love in Di Mawnin” before raising the bar with covers spanning genres far and wide. We grooved to his interpretations of “This Day” and “Whip Appeal” and broke loose to the strains of popular club anthems “Blame It on the Alcohol” and “Nobody Nuh Haffi Know”.

Which brings us to the subject of the singer’s musical influences and wide-ranging tastes, which were on vivid display. Whether he was dropping some Bruno Mars (“Just the Way You Are”), channeling John Legend (“You and I”) or paying tribute to reggae greats from Freddie (“Don’t Wanna Be Lonely”) to Boris (“Wanna Wake up With You”) to Beres (“Hope We Never Get Tired”), Mario Evon was having way too much fun on that Redbones stage. But, more importantly, the audience was reveling in the fireworks and the rhythmic passion as much as he was.

According to this singer-songwriter and medical doctor, the stages of love run the gamut from infatuation to fantasy to marriage to happily ever after, and with an awesome set of musicians in tow, he delivered the tunes to back him up. We would have loved to hear a few more original songs from his growing repertoire but, for what it’s worth, Saturday’s show – on the eve of Valentine’s Day – was a clear winner. Full of high points and musical flourishes, Stages of Love certainly put us in the mood.