THE TALLAWAH INTERVIEW: Poet and publisher Kwame Dawes on his life’s work, his latest projects, and this year’s Calabash Festival 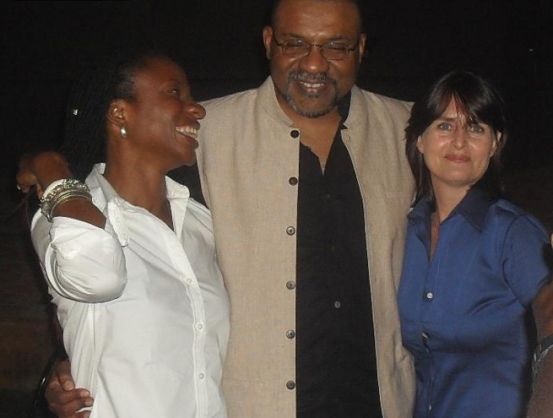 GOOD COMPANY: Dawes (centre), sharing a moment with Carleene Samuels and Justine Henzell, at Redbones, 2011. Below, the cover art for Speak from Here to There.

Kwame Dawes’ long list of credentials may include acclaimed author and poet, Emmy winner, respected publisher and editor, father, husband and brother (and the list goes on), but he’s done his most transformative work in the classroom. Currently in the island as a guest of the Institute of Jamaica for Grounation 2016, the Ghanaian-Jamaican, US-based Professor of Creative Writing, now in his 50s, spoke with TALLAWAH about his life then and now – and what’s next:

TALLAWAH: You’ve been in the teaching business for quite some time now. Are you still as passionate about the profession as in years past?
Kwame Dawes: When I was at the University of the West Indies, in my second year I decided that that’s what my life was going to be spent doing. I was going to teach. And I’ve been doing it ever since. So teaching is a passion; teaching is something that I guess is a part of my Christian tradition. My father was a teacher, my grandfather was a teacher, and my great grandfather was a teacher. So it runs in my family. My sisters are both teachers. That’s what we do.

TALLAWAH: You’re widely known as a very prolific author and publisher. What have you been working on lately?
Kwame Dawes: I continue to publish books of poems. This year I have about eight books coming out. About three of them are books of poetry, plus a number of anthologies that I’m editing. Peepal Tree is publishing, as well as another press out of the United States.

TALLAWAH: Any of your own writing?
Kwame Dawes: I have a book of poems called City of Bones that will be published by Northwestern University Press in the US this summer. And then there’s a book in Spanish coming out in Mexico that I’ve called Vuelo (which means Flight) and that comes out in the summer as well. And then there’s one more book that comes out in the summer, which is a collaboration with the Australian poet John Kinsella. It’s called Speak from Here to There, and it’s a conversation between me and him.

TALLAWAH: Did your friend Colin Channer get any encouragement from you in publishing his first poetry collection, Providential, last year?
Kwame Dawes: I worked with him; I was the editor for that book. Working with Colin is always a fun experience. He is a novelist, yeah. But he’s taken poetry very seriously and has always been engaged with writing poetry. And it’s fantastic book; it’s a remarkable book. So it’s worth checking out. 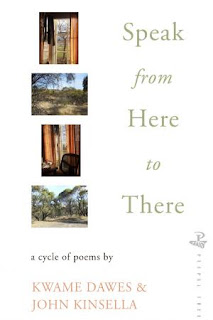 TALLAWAH: The Calabash Literary Festival, which you helped to establish, is supposed to return to the scene in May. What can you tell us?
Kwame Dawes: Nothing. But yes, Calabash is coming back. It’s gonna be exciting. We have writers from many parts of the world, including the Caribbean. And it’s just gonna be a fantastic programme. But you know we don’t release the info until our launch in April.

TALLAWAH: You’re among a panel of poets and thinkers discussing the late great trombonist Don Drummond for this week’s leg of Grounation 2016. Why was it important for you to participate?
Kwame Dawes: I’ve always been interested in Drummond. I’ve written about Drummond. I’ve done plays about Drummond. Drummond’s music has been a part of my life and my understanding of life, and so on. And Herbie Miller asked me [to come], and if Herbie asks me to do anything, then I will do it. So it’s very exciting to get back here to do this kind of work.

TALLAWAH: Indeed. Looking to the future, how will the rest of the Kwame Dawes story unfold?
Kwame Dawes: (Laughs). I’ll just continue to look after my youth dem and look after my wife, pay my mortgage and continue to produce the work that I do. A lot of my work now is facilitating the work of poets from all over the world, especially African poets. And I arrange and train and work with poets to create opportunities for publication. And that’s been the biggest purpose of my life. So that never stops.