THE TALLAWAH INTERVIEW: Singing Melody opens up about his hit reality show – and putting family first 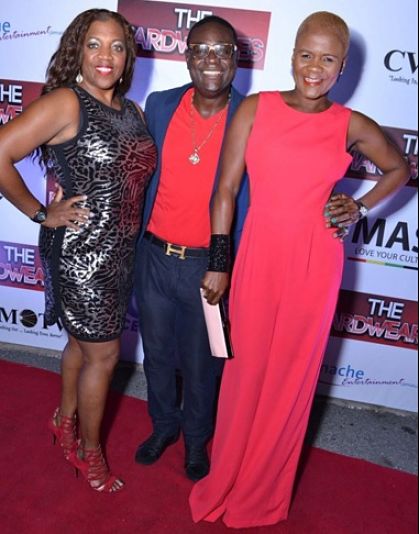 TRUE COLOURS: The singer flashes a smile while flanked by wife, Ruby (left) and Marion 'Lady Saw' Hall. Below, The Hardweares share a tender moment; Rehearsing with the band.

Many Jamaicans first got to know Singing Melody as a talented crooner whose piercing vocals are as distinctive as they are arresting – and as frontman of the male quartet LUST. But, over the course of the past 12 weeks, we got to see the 47-year-old (né Everton Hardweare) in a whole new light – as husband and family man – thanks to the CVM-hosted reality show The Hardweares, which just concluded its successful debut season. At the recent wrap party, on the terrace overlooking the crystal swimming pool at the Jamaica Pegasus Hotel, TALLAWAH chatted with the singer-songwriter-turned-reality star about putting his story out there, why The Hardweares is no vanity project, and being an inspiration to Jamaicans at home and abroad.

TALLAWAH: The curtains just came down on Season One of The Hardweares. What was the high point for you?
Singing Melody: The best part of doing The Hardweares is really just seeing the result of it and what it really means to a lot of people. We bring back that old time vibe, where the home is happy, a home that is filled with so much love and prosperity. The family coming back together and staying together. You see the arguments and the fuss and the fight and all of that. But The Hardweares is just a clean product that brings back that whole family vibe.

TALLAWAH: There was a lot of talk about you building your dream home, as one of the highlights of Season One. Did the whole Andrew Holness/Big House saga feel familiar to you?
Singing Melody: People have never come at me like that or come at my family like that because they know us. They know that we are hardworking people. And Andrew Holness is the same thing. He’s a very hardworking man who has been working all his life. So now he wants to build a home. It’s a proud thing to do, and as Jamaicans we should look to uplift Jamaica and put ourselves at a standard where people can look at us and say this is a successful nation. You shouldn’t wait until somebody becomes successful then you want to tear them down. That doesn’t shed a good light on Jamaica.

TALLAWAH: There are those who feel that reality shows are nothing more than vanity projects for the rich and famous to flaunt their good fortune. How do you respond?
Singing Melody: For us, it’s a totally different thing, because as you heard in the story from my wife earlier, I really didn’t want to be a part of [the show] if it was going to be something like that. When even 12-year-olds come up to me to say how they watch the show and feel inspired by it, it brings out a certain kind of upliftment. People have gone back to the days of being inspired something positive. And you would have noticed that the show is not shown a lot because it’s not just about the house. The house is just the main attraction for us to invite people to come in.

TALLAWAH: How far do you think the series can go?
Singing Melody: So far we’ve gone into the United States. But we still need a bit more support from [local sponsors]. It’s a very expensive show to do, so you know we’re coming out the pocket doing everything on our own. So we’re looking for help, for sponsorship. The show is not just about my family; it’s about Jamaica. To show Jamaica in a better light.

TALLAWAH: Which Jamaica’s reality show would you tune in to watch?
Singing Melody: Maybe my friend Richie Stephens’ because he has a good story to tell, in terms of where he is coming from and what he has contributed to Jamaica – the music, family life – even being a part of charity like what we do. But some people don’t want to go on camera. You also have a man like Tony Rebel who has contributed a lot and have something to talk about. And I think that would inspire a lot of young people to find themselves and realize that they can make it.

TALLAWAH: After 10 years of marriage, how do you and Miss Ruby keep the flame of your relationship burning so bright?
Singing Melody: We enjoy doing things together. And when she’s inspired, I am inspired. So I support her 100 percent in whatever she wants to do. Sometimes it hurts me and it hurts us in the long run, but we enjoy taking chances. She was one of the executive producers on my last album that opened at number five on the Billboard reggae chart. We work together as a family and we join each other on our ventures to make them successful.

TALLAWAH: Let’s talk music. Do you have more fun as a solo artiste or as a member of the group LUST?
Singing Melody: Both. Last week I was in Atlanta for Red & White Affair, a Valentine’s special, then I was to meet up with the group for a performance. But we didn’t get to perform due to negligence of the promoters. I still did my show my Atlanta. I had a lot of fun doing it. And joining my brothers on stage is no different. It’s the same kind of energy. 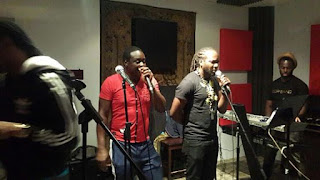 TALLAWAH: The last time I saw the group, you were rocking the Catherine Hall stage at Reggae Sumfest in MoBay. What’s next for you guys?
Singing Melody: We are constantly working. We have shows coming up, like a Mother’s Day event here in Jamaica. We also have upcoming events in the United States, Canada and Barbados, and so on. We are recording as well, working on new stuff for this year.

TALLAWAH: Do the upcoming General Elections interest you?
Singing Melody: Anything to do with Jamaica I have great interest in it. I think that every voice must be heard because that’s how we make change. I don’t believe in sitting down and expecting change to come. I think all of us, but especially our young people, must get up and let their voices be heard regardless of which direction you wanna go because that’s how democracy is; we gotta share our opinion.