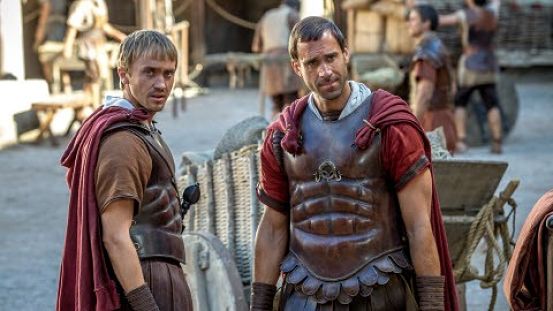 MEN ON A MISSION: Fiennes, right (as Clavius) and Felton (as Lucius) in a scene from Risen.

The most fascinating premise explored in the new Biblical-themed movie Risen concerns the scandalous series of events that unfolded in the wake of Jesus’ Crucifixion. Directed by Kevin Reynolds, who co-penned the script with Paul Aiello, the film offers intriguing arguments as to why certain things happened, as a backstory to the Crucifixion, recounted from the point of view of people we never heard from. In fact, the main narrative comes from a Roman named Clavius (Joseph Fiennes), essentially the right-hand man of the ruthless Pontius Pilate (Peter Firth) and leader of his army.

As the Biblical tale goes, following Jesus’ death on the cross, his body was removed and buried in a tomb provided by Joseph of Arimathea (Antonio Gil). But when the body goes missing from the tomb after three days, conspiracy theories abound. And that’s more of less what the movie is about: what happened to the body and the search for the body.

As Clavius heads up the investigation to find the missing corpse (before Emperor Tiberius pays them a visit), he has to decide who and what to believe: that something supernatural happened to the dead Jesus or his remains were simply stolen by the disciples, while the guards slept drunk out of their minds. Of course, by this time Pilate is stark raving mad, desperate to prevent an uprising.

What plays out is a very thought-provoking sequence that forces you to consider Jesus’ last days from a whole new angle. And speaking of Jesus (referred to as Yeshua the Nazarene in the film), he is charmingly portrayed by the New Zealand-born Cliff Curtis, whose most popular previous film is probably 2002’s Training Day.

Fiennes, made famous by his titular role in Shakespeare in Love, gives a characteristically robust turn as the conflicted Clavius, who must ultimately choose between his allegiance to Pilate’s tyranny and doing the right thing.

As for the disciples, the Simon Peter character (Stewart Scudamore) is a strong leader, as expected, but roles like that of Mary Magdalene (Maria Botto) and other followers like Bartholomew (Stephen Hagan) fall flat. Harry Potter’s Tom Felton (all grown up), meanwhile, steals scenes as Clavius’ eager sidekick Lucius.

Clocking in at one hour and 47 minutes, Risen is an ambitious undertaking from Reynolds, who captures the heady chaos and excitement of the era. But, ultimately, it’s an uneven film that sometimes loses its way and would have benefited from the injection of some bonafide star power.

Email ThisBlogThis!Share to TwitterShare to FacebookShare to Pinterest
Labels: At The Movies, Current Cinema, Flick of the Week, Joseph Fiennes, Movie Reviews