FLICK OF THE WEEK: Action-packed Allegiant explores honour and humanity with solid results 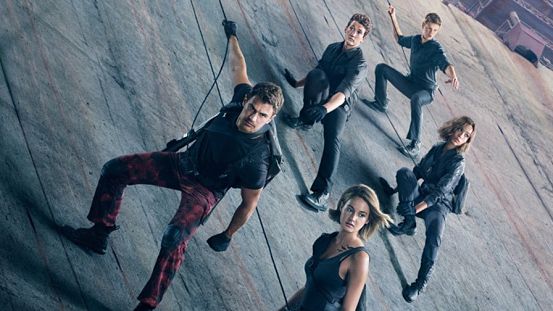 IN THIS TOGETHER: Woodley and James (forefront) take the lead on a quest for a survival.

The threat of having their memories erased won’t be the worst thing to happen to Tris (Shailene Woodley), Four (Theo James) and their allies in Allegiant, the latest feature in the Divergent series that’s just as edge-of-your-seat thrilling as the previous two films in the franchise. Putting their lives on the line for the greater good, they’ll be hunted down like fair game on a shoot-to-kill mission, after fleeing their war-torn base in Chicago.

Directed by Robert Schwentke, the futuristic film is an action-packed romp that comes at audiences with lots of talk about genetic modification, radioactive wastelands and factions at war. But deep down it’s big-budget, popcorn-popping entertainment and yet another strong vehicle to showcase the awesome talents of Miss Woodley, whose Tris remains a likeable heroine in whom there’s a near-seamless blend of the tough and the tender.

When Tris, Theo, Peter (Miles Teller), Christine (Zoë Kravitz) and Tris’ ne’er-do-well brother Caleb (Ansel Elgort) are rescued by soldiers and whisked off to The Future, Tris is singled out and taken to meet David (Jeff Daniels), an intimidating big-wig nicknamed The Director, who runs the Bureau of Genetic Welfare. He seems obsessed with Tris’ genetic makeup – she’s “pure” while almost everyone is “damaged”.

David oversees a programme that rescues young and vulnerable children from The Fringe, but it’s not enough, he laments. He tries to interest Tris in becoming his guinea pig, using her “genetic miracle” to help save the rest of the world. Playing the protective boyfriend, Four has his doubts about David and the minions who work for him. But Tris wants to believe in David and the life-saving humanitarian work he seems so passionate about. But we all know she’s in for a rude awakening.

With a running time of almost 95 minutes, the movie boasts perfect pacing, high-octane action and sure-handed direction from Schwentke. There is never a dull moment. But Woodley is the best thing about the movie – a captivating presence whose emotional intelligence and deft grasp of her character’s complexities and inner struggle is something to behold. It becomes clear that her turns in such films as The Descendants and The Fault In Our Stars were groundwork from this transformation into a believable action hero. Give her a few more years, and she’ll be giving Charlize Theron a run for her money.

The rivalry between these two leaders underscores one of the most inconvenient truths in the movie, and the entire series for that matter: change doesn’t come without sacrifice and there can be no peace without struggle. Tyrone’s Verdict: B+