FLICK OF THE WEEK: Faith and family are put to the test in Miracles from Heaven 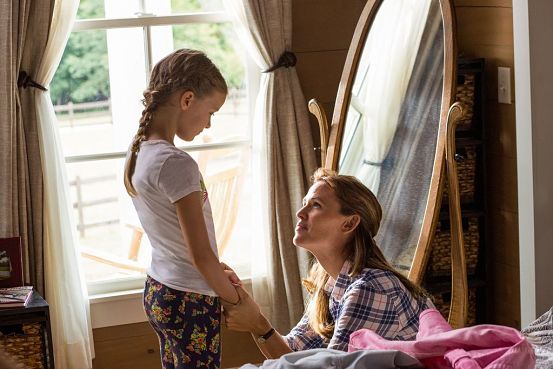 MOTHER COURAGE: Garner (Christy) and Rogers (Anna) sharing a scene from the film.

It’s every mother’s worst nightmare: your healthy, fun-loving kid suddenly becomes gravely ill, writhing in pain night after night, and the expensive doctors you visit haven’t got a clue what the real problem is. They tell you your kid is lactose intolerant, that she has acid reflux. But you know better.

You refuse to give up, and your relentless finally yields a breakthrough in the form of a medical veteran, who delivers the shattering news that your Anabelle is suffering from a rare and incurable disease called pseudo motility disorder, a stomach condition which prevents her body from processing hard food. Her swollen tummy has become a permanent part of her appearance. Until, that is, something truly miraculous happens.

That’s what happened to Christy Beam, the devoted matriarch of a close-knit, well-to-do Texas family whose memoir gets the cinematic treatment in Miracles from Heaven, directed by Patricia Riggen. It’s a deeply affecting Christian drama about the power of faith and the elasticity of the human spirit in the face of the unimaginable.

Cast in the role of the devastated Christy, Jennifer Garner faced the tough challenge of articulating incredible agony. To a lesser skilled actress it would have proved daunting, but Garner responds like a trooper to the demands of the part and deeply impresses, zoning in on the emotional heft that the performance calls for.

As the afflicted Anabelle, a warm and intelligent 10-year-old with a startlingly firm spiritual base, Kylie Rogers is a gem of a discovery whose heart-tugging performance is a portrait of hope and humility that becomes only more pronounced when the circumstances under which her healing occurs mystifies medical geniuses and the world at large.

Rounding out the strong supporting cast are Martin Henderson as Christy’s veterinarian husband Kevin and Queen Latifah as the quirky and full-of-life waitress Angela, who befriends Christy and Anabelle when they visit Boston to see a specialist. Unsurprisingly, Latifah’s Angela brings a spark to a movie that’s otherwise a real tear-jerker.

Working with screenwriter Randy Brown, Riggen gives the movie just the right blend of seriousness and weepiness, striking notes that never feel false or forced. That the film was inspired by real-life events makes the Beams’ story that much more compelling.

At the same time, this is not just a movie about “miracles”, it’s a lesson in facing your fears and finding the courage to overcome a serious test of faith. Tyrone’s Verdict: B+

Email ThisBlogThis!Share to TwitterShare to FacebookShare to Pinterest
Labels: At The Movies, Current Cinema, Flick of the Week, Jennifer Garner, Movie Reviews