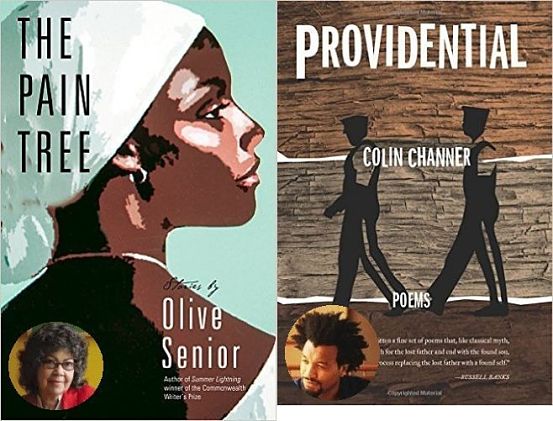 THE CONTENDERS: Senior is vying for her second win, while Channer is up for his first.

When the winners of the OCM Bocas Prize for Caribbean Literature are announced on March 27, Jamaican-Canadian author Olive Senior could walk away with a win for the second time. The acclaimed writer, whose many accolades include the Commonwealth Writers’ Prize and the Gold Musgrave Medal from the Institute of Jamaica, has been nominated in the fiction category for her latest short-story collection, The Pain Tree (Cormorant Books), which is being launched at UWI Mona this Thursday.

Senior topped the non-fiction category last year with her Panamas Canal opus Dying to Better Themselves (UWI Press). This time around, she’s vying for the fiction award alongside Trini-Canadian Andre Alexis (Fifteen Dogs) and Trinidadian Sharon Millar (The Whale House).

A Jamaican has been nominated in all three categories. For the poetry award, Calabash Festival co-founder Colin Channer, who releases Providential (Akashic Books) last year to wide acclaim, is up against Trinidad’s Andre Bagoo (Burn) and Tiphanie Yanique (Wife), a past winner in the fiction category, who hails from the US Virgin Islands.

Versatile scribe Jacqueline Bishop scored a nomination for her non-fiction effort The Gymnast and Other Positions. Also nominated in that category: The Ties That Bind: The Black Family in Post-Slavery Jamaica 1834-1842 by Jenny M. Jemmott and ‘Membering by veteran Bajan-Canadian author Austin Clarke.

As mentioned earlier, the category winners, to be awarded US$3,000 each, will be announced on March 27. The overall winner, however, will be named during the 6th Annual Bocas Lit Festival (in Port-of-Spain, Trinidad), scheduled for April 27-May 1. The overall prize is valued at US$10,000.