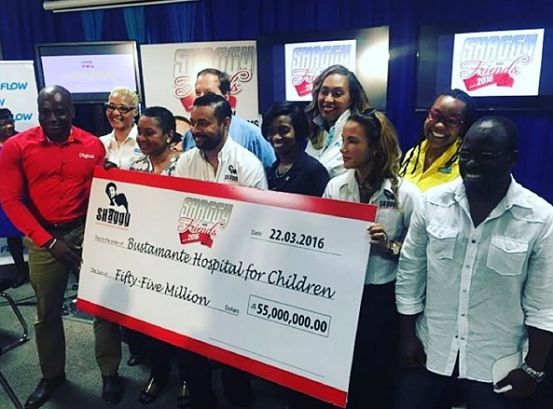 LIFE SAVERS: Shaggy and his team and sponsoring partners sharing a moment with the big cheque on Tuesday.

Orville ‘Shaggy’ Burrell and his team may have been the toast of Tuesday’s handing-over of the proceeds from the 2016 Shaggy & Friends megaconcert at the Bustamante Hospital, but he had to share the praise and the spotlight with the hospital’s hardworking staff, who were repeatedly lauded during the ceremony for their tireless efforts at the facility, in spite of major resource constraints.

According to board chairman, Kenneth ‘Kenny’ Benjamin, Shaggy’s continued philanthropy goes a far way in motivating staffers to give of their best. “Shaggy has not only helped to improve the physical facilities at this hospital; he has raised morale among the staff,” Benjamin told the packed conference room. “When Shaggy walks around the property, everbody is smiling. They are so motivated to work. Everything is about dedication to this hospital. These kinds of donations give hope to staff and parents, as we dare to care for our children.”

Heartfelt messages also came from representatives of corporate sponsors Scotiabank (Vice President Yanique Forbes-Patrick), FLOW (Head of Marketing and Sponsorship Kim Lee) and Managing Director of Wata/Wisynco William Mahfood, who presented a cheque valued at $8.26 million to this hospital, the proceeds from a recently launched initiative where three dollars from every bottle of Wata sold is donated to the hospital.

Health minister Dr. Christopher Tufton also addressed the gathering, pledging the government’s commitment to finding solutions to “an under-resourced but critical area of our health-care system”: ensuring that all children have access to proper health care.

The main event arrived when the Shaggy Make a Difference Foundation formally presented their symbolic cheque (worth $55 million) to the hospital’s directors, including Senior Medical Officer Dr. Michelle Dawson and Head of Anaesthesia and Intensive Care, Dr. Lambert Innis.

In addition to leftover funds from previous donations and fundraisers, the money will go towards establishing a CAT Lab and getting work underway for a cardiac unit. For the future, Shaggy’s team has set their sights on constructing an ICU Unit at the hospital. “This hospital is a gem, and we need to take care of it,” Shaggy says. “The work nuh stop. We have things to do.”