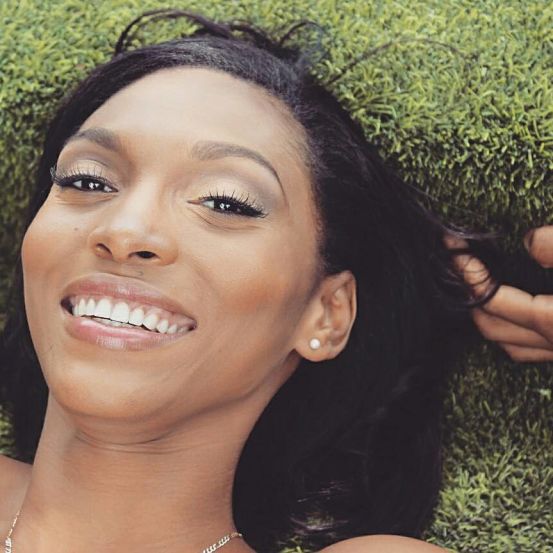 STAR OF THE SHOW: Gratitude and positivity are key ingredients in Sakina's recipe for success. Below, in Last Call (left) and A State of Affairs (with Jerry Benzwick)

From the main stage to the small screen, Sakina Deer is on a career high that solidifies her place among Jamaica’s hottest young talents of this modern generation. These days, she’s juggling multiple projects – Jambiz’s Duppy Whisperer, TV J’s Weekend Smile and the impending Dope Fiend – with raising her baby girl. Pressing pause for a minute, Deer brings TALLAWAH up to speed on life in her orbit – and why she’s anxious and excited about the road ahead.

IN the life of any serious actress there comes a major turning point. For Sakina Deer, that moment arrived when she stepped into the role of Etta in the 2013 comedy-drama If There’s A Will, There’s A Wife at the Centrestage Theatre. “That was definitely the turning point for me. I had to overcome a major insecurity in terms of my abilities as an actress,” she confesses. “Most of the roles I had done before then were very dramatic. The comedy element wasn’t the laugh-out-loud kind of humour, and I wasn’t convinced I had it in me. So I had to dig deep to deliver a performance that was more or less outside of my comfort zone.”

It was precisely the kind of creative challenge the actress needed to step up her game. In the end, she not only nailed the part; she copped that year’s Actor Boy Award for Best Supporting Actress – her first major acting award to date.

That kind of courage and capacity for rising to the occasion, coupled with a commitment to whatever role she’s tackling, continue to endear Miss Deer to local theatre audiences. Whether she’s the vulnerable and naïve younger sis Trixie in The Baby Scam or the feisty housekeeper Precious in Uptown Bangarang, she manages to come across as both relatable and believable. These days, she’s having loads of fun and throwing caution to the wind as the flighty and delusional prima donna Sky McGuiness in the superfunny Duppy Whisperer, which runs until June.

Being in the theatre for so long, Sakina says, she could easily relate to Sky’s over-the-top antics. “She thinks she’s more than she actually is and that’s part of what makes the character so funny and fun to play,” says Deer, who watched the film classic Camille, about a histrionic diva, for research. “And having been in the theatre for so long it wasn’t hard to recognize her, because you do have those actors who feel that they are on top of the world, and that’s how Sky sees herself.”

In spite of the enviable success she’s had over the years (a career that spans work with the Jamaica Musical Theatre Company, Father HoLung & Friends and now the Jambiz crew), Sakina Deer couldn’t be more down-to-earth. Catching up with her at the Centrestage Theatre on this balmy Tuesday night, fresh from another outing as Miss McGuiness, feels like chit-chatting with an old high-school pal who has hit the big times and is now regaling you with firsthand tales of the sweet success that’s come through hard work and sacrifice.

Though the Jambiz crew and Centrestage is now her home away from home, that hasn’t stopped this go-getter from spreading her wings. To wit, last December she flew to New York to shoot scenes for Dope Fiend, a TV drama series that’s currently being edited to be pitched to the networks. “It was actually a good experience,” she recalls of working with screen veterans like Malik Yoba. Without spilling the details, Sakina says the role pushed her to raise her game. “I got to do so many things I’d never done before as an actress. It was an opportunity for me to grow, and I did my best.”

And while she awaits word from the producers behind that project, she’s getting comfy on the small screen locally as co-host (opposite sportsman Adrian Brown) of TV J’s morning show Weekend Smile, a recurring role that’s become a semi-permanent gig, given the departure of Kerie ‘Kiki’ Thombs. “I’ve been learning a lot about film and being on camera. Believe me, I thought it would have been harder, but once I slip into my media personality, it all comes together,” she tells TALLAWAH.

Turning 32 this year, Sakina Deer, who has long put her plans to pursue a degree in the Natural Sciences (UWI Mona) and Medical technology (UTech) on pause, believes she has found her true calling in the world of acting. It’s a passion she can hardly put into words. Make no mistake, she finds boundless joy in being a single mom to three-year-old daughter Sonja, the absolute joy of her life. But when she’s on stage, a special kind of bliss takes hold of her.

“At this point in my life, I feel awesome. I never knew I’d be a mom and an actress at the same time,” admits Deer, who is very close to her own mom, while most of her siblings and her dad are living overseas. “I’ve been acting full-time since my daughter was born, and at this point I feel like I’m doing exactly what I was meant to do.”

That’s why when it comes to the road ahead, she is quick to admit that it’s a future she can’t reasonably predict. And, in spite of the occasional pangs of anxiety, she’s long made peace with that. “I have no clue, and that’s the scary and exciting thing,” she tells me, curled kitten-like in her leopard print top, close-fitting dark pants, her long and wavy hair cascading down to her slender shoulders. With her trim physique and glamazon appeal, she looks runway-ready. “Life can be positive if you make it; that’s what I’ve learned.”

She continues, “I’ve learned that a positive outlook always brings positive returns. If you consistently put positivity out into the universe, it gives it back to you. So that’s how I choose to approach my future.”


“At this point, I feel like I’m doing exactly what I was meant to do.”