THE YOUNG & THE RESTLESS: Choices and consequences collide in ghetto-fab musical Block 24 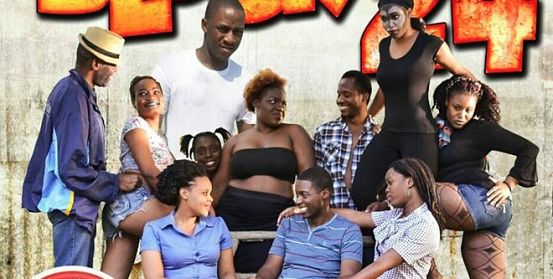 ON THEIR OWN: The young actors who populate the show's colourful cast.

When is a young man truly ready to take on the responsibilities of adult life? Prolific playwright David Tulloch firmly plants this question (among others) at the root of his latest theatrical offering, Block 24, a lightweight musical exploring young-adult angst and restlessness, dysfunctional family dynamics and the eternal intermingling of choices and one’s destiny. It’s a moderately entertaining show, yielding mixed results, but the messages are sobering and its heart is in the right place.

At the centre of all the mischief and musical madness is Ryan (Stephen-Rae Johnson), a 21-year-old striving to establish his independence and assert his manhood in the face of unyielding pressure from his disapproving father (Wayne Thorpe), who still treats him like a baby boy. Ryan is fed up with not being seen as a big man. He ditches dear ol’ dad and heads downtown to a zinc-fence tenement yard called Block 24, where he encounters some kindred spirits – young people fighting for their freedom and their identity/individuality.

Things take a stormy turn when Ryan and Jolene catch feelings, pushing Kamal to the brink. But that becomes the least of their worries when Hurricane Tiger puts Jamaica squarely in its path of travel. The choices that these kids make will determine if and how they emerge whole from the emotional (and physical) tempest that’s about to be unleashed. Casting a keen eye over all the happenings is Madame Fate (Monique Smith), a devilish presence who tries to ensnare them in her tangled web.

Though the musical numbers are devoid of showstopping allure, Kevin Moore’s choreography helps bring them to rousing life. Tulloch’s dialogue fares better – sharp and true to the Jamaican experience. And the actors, for the most part, muster the requisite conviction to sell these characters. Especially Johnson, whose leading-man potential can’t be denied. He transforms Ryan into a protagonist worth rooting for, with the charisma and the cojones to fight for what he believes in.

Thomas and Dunkley are the other standouts in a cast comprised mainly of inexperienced performers who make up the core of New Kingston’s Rotaract Club. Even so, the overall effort is laudable, thanks largely to Tulloch’s respectable directorial choices.

And it can’t be emphasized enough that that’s what the show is about: choices, choices, choices and how they make our lives better or ultimately fill us with regret – whether you’re an over-protective father desperate to ‘shield’ your family or a young man ready to emerge from his shadow and take on the brave new world. Tyrone’s Verdict: B