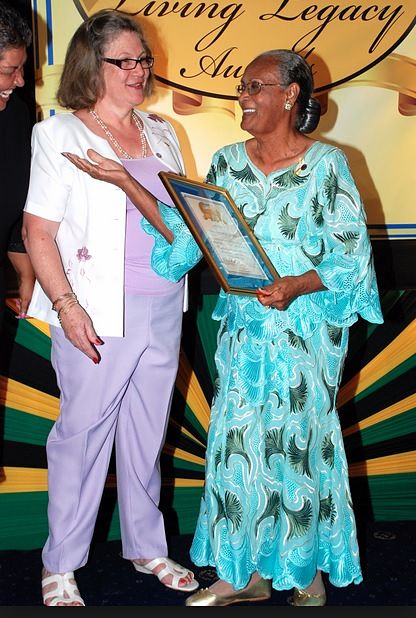 GETTING HER DUE: Mock-Yen being honoured by the Caribbean Community of Retired Persons in 2012. Below, with fellow JDU 2016 honorees Sheila Barnett and Tony Wilson.

Alma Mock-Yen had tears in her eyes as she gave a moving acceptance speech at Jamaica Dance Umbrella’s opening night ceremony, inside the Philip Sherlock Centre, UWI Mona, on Wednesday. The doyenne, a living legend of the dance and media worlds, was overcome by emotion, having just listened to glowing video testimonials from one of her most famous former dance students L’Antoinette Stines and her adult son Sean, before a packed theatre house.

Mock-Yen, who many of today’s leading dancers and choreographers (and journalists!) consider their first teacher, fought back the tears as she reflected on aspects of her journey and called for greater collaboration and harmonious relations among our local dance companies.

“Dance is doing well in this small country, but if there’s anything I could change with my magic wand, it would be to bring about much closer collaboration among the groups,” said the 80-plus year-old dazzler. “Competition is what drives the dance group, but always remember that your competitor is not your enemy. With this religion that we call dance in Jamaica, it can only grow if we work together. To all the dancers, I want to say be happy with your dancing colleagues.” 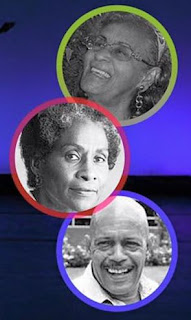 Alma Mock-Yen used to write reviews (published in the press) of dance recitals put on by local companies. But she put her criticisms on pause after being banned by one local dance company from attending their seasons, after one of her reviews apparently rubbed the group’s leader the wrong way.

To this day, Mock-Yen remains hurt and perplexed by the episode, having made kind observations in the review. But she’s learned that you can’t please everybody. Now, she says, she’s ready to put those painful memories behind her for good. “The thought of being honoured by you [Jamaica Dance Umbrella] here tonight,” she said, “has given me the courage to start writing reviews again.” Resounding applause ensued.

L’Antoinette Stines recalled that before Miss Mock-Yen officially became her instructor, she got her first lesson, as an energetic young girl, standing at Mock-Yen’s gate in Harbour View one evening, watching one of her dance classes in progress. “As a young dancer, I was extremely full of energy, but she taught us to think through and to theorize dance,” the L’Acadco Dance Company director shared. “So as a young girl I was learning to dance holistically.”

Developing technique and crafting choreography were key things Stines also learned from her legendary teacher. “I will always remember Alma as the complete dancer and choreographer, who taught us that dance begins not with the body but with the spirit,” said Stines. “She is a spirit dancer, and that’s what she taught us – to spirit dance. She made me have a deep respect for the form and for classical ballet, in particular, which I still have to this day.”

Along with Mock-Yen, who wrote the libretto for Jamaica’s first integrated musical, Once Upon a Seaweed, mounted for the 10th anniversary of the Ivy Baxter Dance Company in 1960, fellow dance-world icons Sheila Barnett and Tony Wilson were also honoured.