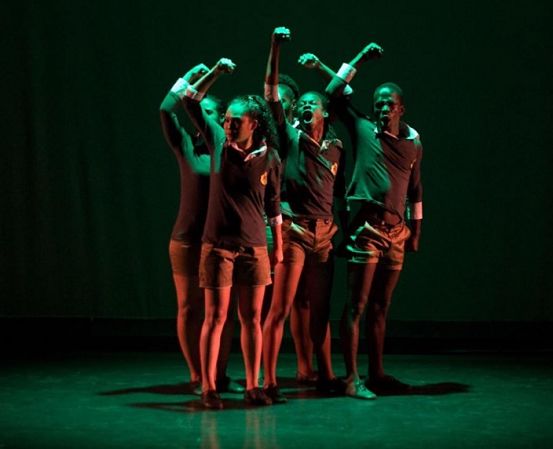 Amanyea Stines delivered the most captivating choreographed work at the University Dance Society’s 45th season (“Phoenix”) inside the Philip Sherlock Centre on the weekend. A gripping three-hander entitled “To Each Its Own,” the work looked at domestic abuse and women in crisis. It’s a spare, lacerating piece of dance theatre that you don’t just see; you feel it as it works its way under your skin, pulling you in with its tidal wave of emotion and unyielding earnestness.

Adele’s shattering vocals (“I Miss You”) provided a reservoir of feeling for committed dancers Robyn Lee, Savanna Lloyd and Zoe Heywood, who convincingly transformed the stage into an artistic canvas on which to project the passion and pain of their characters – three conflicted women clinging to hope against hope, women seemingly on the edge of a breakdown. To say the least, it’s a stunning work of art and an unforgettable creation from Stines.

Similar qualities could be cited to describe Chelsea Brown’s “D’M Powament,” which yielded a throbbing mix of trepidation, transformation and triumph, as it shared the story of a downtrodden and insecure girl (the mysterious blackbird) who, by the end of the piece, evolves into a confident young woman rising above her adversities. The strong supporting cast of male and female dancers used their agile and frequently acrobatic movements to good effect.

Meanwhile, we loved the poetry and subtle flair of Kyisha Patterson’s “Bare”; the dizzying energy and kaleidoscopic appeal of Kelly Barrett’s “Body Riddims” and the ambitious-meets-unpretentious scope of Maria Hitchins’ “Champions, Yaad and Abroad,” an experimental surfing of dancehall’s myriad styles.

But the season was at its most compelling, however, putting the spotlight on such ideas and concepts as self-actualization and liberation. Choreographer Kareen McLean did a terrific job with “Fear is Fear,” a sublime work featuring red costume-clad dancers, lots of angst and the ideal score in Philip Glass’ “The Hours” theme. The Pharell Williams hit “Freedom” helped turn Michael Holgate’s “Ubuntu” into an irresistible and triumphant meditation on togetherness and strength in numbers, with Afro-Caribbean sensibilities thrown into the mix.

Like Stines’ “To Each Its Own”, the very physical and technically rigorous “Trapped” (choreographed by the talented young men of D’Crew Jamaica) used a trio (Chester Jones, Mikail Samuels and Aaron Linton) to unleash a torrent of conflicting emotions and souls in torment who eventually find resolution, if only momentarily, in the aftermath.

In the end, UDS’ splendid 2016 season left us viewers with a whole lot to ponder, particularly the power of art that disturbs, art that compels and art that dares.