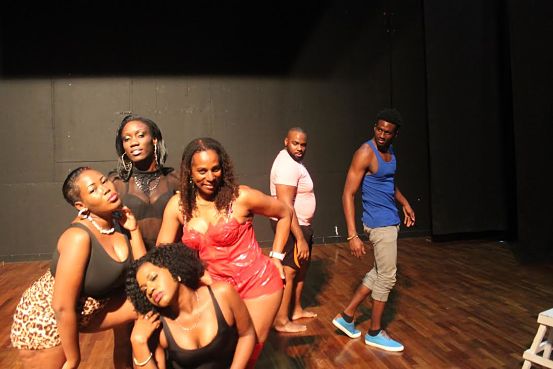 HOW DO YOU WANT IT?: Cast members work the stage in this scene from the show at the Courtleigh Auditorium.

Still, the show comes packed with megasized humour and highly commendable acting performances (Karen Harriott, stand up!). At the same time, Ellis is such a clever and observant writer that the material is never less than insightful and relatable. Sometimes side-splittingly funny.

In one skit for instance, Tesfa Edwards appears as a Rastafarian shopkeeper schooling an impatient young man (Jakeme-Jamar Clarke) on the proper way to please a woman, citing a mix of stamina, hard-earned knowledge and patience as fail-proof tools. But we later see how that turns out. At a golden age home, two elderly women (Harriott and Lakeisha Ellison) lament their ruined sex lives, while two of their male counterparts (Clarke and Matthew Boyd) brag about scoring some action in spite of their geriatric status.

In one of the most telling scenes, Harriott appears as a lover of insatiable appetites, but her poor man (Edwards) can’t keep up. Fireworks ensue. As they say, hell hath no fury like a woman scorned. Then there’s the two-sides-to-every-story bit – the woman (Ellison) dishing to her girlfriends about the man’s dismal performance, while the man (Edwards) brags to his boys about rocking her world that night. As expected, the audience can’t get enough, some perhaps seeing their own personal experiences reflected in the action on stage.

The show’s best monologue, however, is delivered by Harriott, who regales us with the joys of her regular ‘one-woman show’. “With curves like these,” she asks us, “who needs a man anyway?”

The cast is a nice blend of experienced performers and fresh faces. Kudos to Boyd, Clarke and Gemmar McFarlane, newcomers still honing their talents. For the most part, they hold their own alongside the veterans Harriott and Edwards. Ellison, who has appeared in a number of ‘roots plays’ over the years, proves she has much more to offer.

With its minimalist staging, vivid lighting and a bit of musical theatre thrown into the mix, He Said, She Said (despite its minor shortcomings) will have all your senses engaged. Laced with humour, wit and frank dialogue, it’s entertaining, lively and reasonably satisfying. Tyrone’s Verdict: B