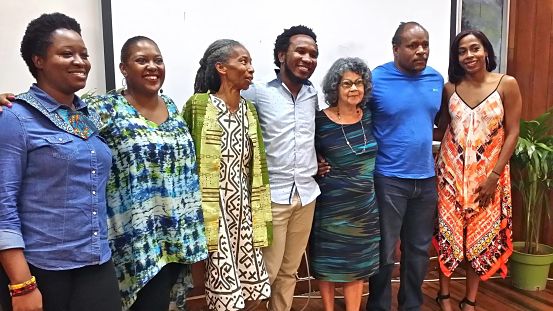 ALL OF US: The authors and KBF organizers gather onstage for photos at Sunday's literary affair. Below, a section of the audience.

Every year, a feast of the written and spoken word greets those who attend UWI’s Love Affair with Literature, put on by the Kingston Book Festival in partnership with the university’s Department of Literatures in English. The major highlight at this year’s staging (the fifth in the series), held on Sunday, was Olive Senior reading from her latest story collection, The Pain Tree, which just picked up a nomination for the OCM Bocas Prize.

The Pain Tree, Senior’s 17th book to date, is a collection of 10 stories, and she opted to share an excerpt from “The Country Cousin”, an amusing take on class, dignity and family dynamics that reminds one of Senior’s penchant for mixing social commentary with wit and keen observations. We meet nouveau riche Angela Fennell, once a poor country girl who comes to town and marries well, striving to live up the values of the elites and to, more or less, transform a sow’s ear into a silk purse. But when her young cousin Rose pays them a visit, Mrs. F’s envy and deep-seated insecurities start bubbling to the surface.

It’s in exploring such relatable episodes, through her magical lens, that Senior excels best. And, by all accounts, The Pain Tree, already declared a solid addition to a body of work that includes Arrival of the Snake Woman and Discerner of Hearts, will be flying off bookstore shelves this season.

AdZiko Simba-Gegele’s All Over Again also touched on relative values, sharing the tale of a 12-year-old boy whose disciplinarian mother and time-consuming baby sister are “the bane of his life.” In one scene, he has to take his sister to school, a task made frustrating by pouring rain. In addition to the poignant imagery that she captures, Simba-Gegele, a sharp-eyed raconteur, peppers her writing with vibrant island life scenery and superstition (tree climbing, “bad things in brown envelopes”) and the kind of nostalgia that, as moderator Tanya Shirley pointed out, evokes some of your own childhood memories. 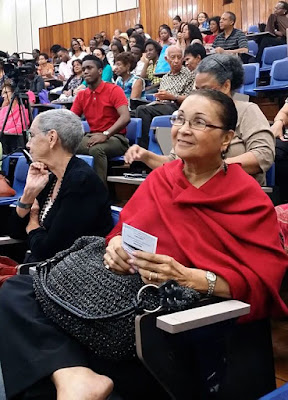 Slices of everyday Jamaican life, delivered with bold-faced intellect, humour and street smarts, characterized Mel Cooke’s presentation – a selection of poems that referenced everything from tourists seeking directions and the Tivoli massacre to “well-armed systems of power” and him being an unabashed “word terrorist.”

Whether his narrator was being glared at by a Rastaman for toting his wife’s belongings (“Man with the Handbag”), reflecting on his Munro College days (“Chapel”) or discovering that his father had a previous wife (“Banana Stains”), Cooke employs a rhythmic style of delivery that forcefully pulls you into his literary orbit.

Vladimir Lucien achieves the same thing with flying colours. The UWI Mona writer-in-residence, who hails from St. Lucia, read some truly memorable pieces from his award-winning debut, Sounding Ground. Lucien, 27, tells colourful, sublimely written stories through his verses, and when he reads them, in that lilting St. Lucian-inflected tenor, they make you a believer. And it becomes clear that travelling and prejudice and family rank highly among his favourite themes.

The haunting “Evening” is dedicated to a grandfather who passed away last October. In “For Jarel”, death comes for an old friend. He introduced us to a series of St. Lucian knick-knacks in “Declaration,” which reads like a grocery list, before raising the bar with “Putting up Resistance”, “My Grandmother’s Mind” and “Protean,” for which he’s working on a translation into a local Creole. Wrapping up his fifteen minutes, he shared “Circle,” which is dedicated to a local hero and polarizing figure in St. Lucian named Father Jess, who also wrote their National Anthem.

“Caribbean literature is in good hands” was the morning’s refrain, and it’s undoubtedly a sentiment both fitting and authentic.

> AND THE NOMINEES ARE: See which J'cans are up for the OCM Bocas Prize