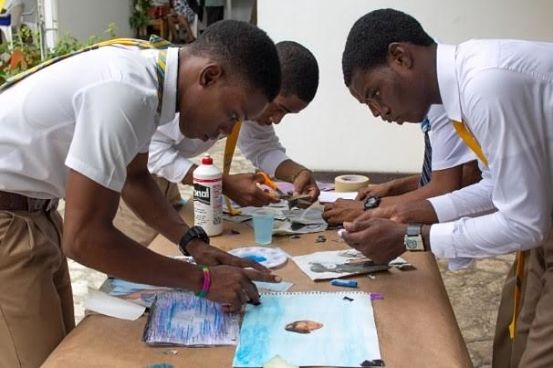 PUTTING IT TOGETHER: Some young male artists getting creative for the annual competition.

Almost 250 entries (the cream-of-the-crop pieces), from the youth and adult categories combined, made it into this year’s Jamaica Visual Arts Competition/Exhibition showcase, dubbed Jamaican M.A.D.E, which got its official opening at the Jamaica Conference Centre on Sunday afternoon. Of the nearly 20 gold medals that have been awarded, the lion’s share was scooped up by high-school students from across the island, who brought their A-game to the competition this year, deeply impressing the judges with their hypervivid imagination and creativity.

Campion College alone produced three of these outstanding entrants: in the Painting category, talented teens Kaylee Reynolds (“Breakthrough”) and Felisceano Wright (“On the Edge”) showed off their impressive skills while Selina Chin (“Portrait of an Old Lady”) produced a stunning work-on-paper to cop gold. Just as fascinating: “Breaking Free” (by Daniel Simms of Newell High), a captivating portrait of a young man peeling back the layers of his identity to reveal his true self; and Darrel Dwyer’s (Pembroke Hall High) elegant sculpture “Water Woman.”

In the age 6-8 years category, Adam Christian (“Animals in Boat”), Juan Pablo (“Dorothy and the Lion”) and Jude Johnson (“Totem Pole”) won gold for their highly commendable pieces of artistic expression. They are all students of the American International School of Kingston, which rightly claimed the Summit Prize for Top School.

But the adults were not to be outshone, with the likes of St. Catherine-bred sculptor Winston Forth (“Natty”) and photographer Dane Hucey (“Threads of Addiction” and “Reflection”), also from St. Catherine, earning their golden stripes from the judges. Yet another son of St. Catherine, Nosbourne Lee, edged out his rivals to snag the Art Live Prize for his terrific sculpture/assemblage creation “Hound of Honour,” a canine masterpiece seemingly fashioned entirely from scrap metal parts.

In short, Jamaican M.A.D.E is a must-see exhibition. This year’s crop of vibrant, award-winning pieces (gold, silver, bronze and merit awardees) remains on view (free to the public) at the conference centre’s upstairs gallery, set up by the JCDC, through Sunday, May 8, when the awards reception will bring all the prize winners together. Acknowledging their favourite piece in the display, members of the public are invited to cast their vote to decide who takes home the coveted Viewers’ Vote Prize, sponsored by the Tourism Enhancement Fund.