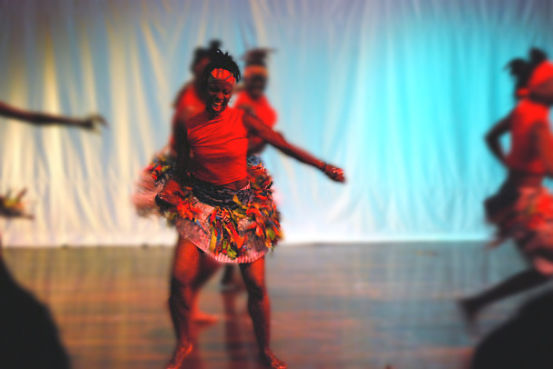 RHYTHM & MOTION: A flurry of energy and vibrant choreography unfolds at the annual dance showcase.

For the 20th anniversary of a cultural treasure like the School of Dance’s annual Danceworks production, you expect a package that signals a step above anything they’ve ever presented in the past. Audiences who flocked to the Bert Rose Studio Theatre (Edna Manley College) last weekend were in for a visual feast as the 2016 season not only lived up to expectations but delivered a wave of choreography that’s not just about sturdy conceptual framework but steeped in a sense of creative risk-taking, imaginative verve and the idea of rebirth.

Particularly interesting was the eerily captivating “The Emergencies of Strangers” (one of the season’s five new works) created by Neila Ebanks, a choreographer who consistently tackles ideas outside the proverbial box, challenging our notions of the ordinary and what we take for granted. Fusing poetry, experimental theatre and the emerging skills of four repertory ensemble students, the melancholy piece exuded a dirge-like resonance that only deepened as the dancers/storytellers (competent third and fourth year students) transformed the stage into a haven of despair and longing.

Driven by robust musical accompaniment from Florence & the Machine, Jessica Shaw’s enchanting “Surrender” (another new work) had a trio of female dancers in full flight, excelling with the spellbinding loops and twirls that figured prominently in the movement vocabulary.

The recital was at its most enthralling however when pieces like a revival of Arsenio Andrade’s dizzying “Congo Laye”, a fusion of Afro-Caribbean movement and tribal revelry that presented a fun challenge for is six female and three male dancers, seized the spotlight. Full of visual power and technical rigour, the work (originated in 1999), vividly engages with Andrade’s reverence for the Motherland and the ancestors, many of whom, we are reminded, had no choice but to survive as warriors on the hunt.

Similarly, Tamara Thomas’ “Lenjen/Djole” transported us to Africa, buoyed by a flurry of high energy, vibrant costuming and spirited drumming. African is Thomas’ forte, and it’s always intriguing to see which part of the continent she’ll take us to next.

One can always expect a wide assortment of moods and motifs at Danceworks. Bringing some tender-is-the-night spark to centrestage was Marlon Simms’ “Ways of Love,” a sultry pas de deux performed by the totally-in-sync Kemar Francis and Charlotte O’Reilly, a duo enraptured by the seductive strains of Maxwell’s “Whenever, Wherever, Whatever.”

And you can’t go wrong with all-Jamaican spice: adding some dancehall flavor to the programme, EMC principal Nicholeen DeGrasse-Johnson’s “Reggaemonic” (1991) brought the wow factor with its cool blend of vintage dancehall tunes, easy-skankin’ choreography, hypervivid costumes and cast of energetic youngsters more than up to the task. It’s a piece as riotous and refreshing as it is angsty and applause-worthy.