FLICK OF THE WEEK: Winter’s War heats up the screen with dueling queens, spellbinding sorcery 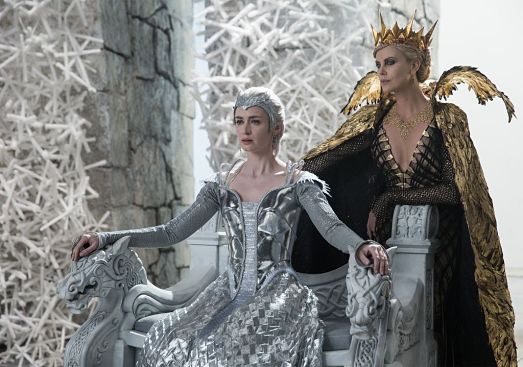 HIGH SEAT: Blunt (seated) and Theron play sisters with a thirst for power. Below, Hemsworth and Chastain.

The Huntsman: Winter’s War is a bewitching and highly entertaining blend of sorcery, sibling rivalry and the dark side of human nature. Does love truly conquer all? That timeless nugget is put to the ultimate test in this Cedric Nicholas Troyan-directed, fairy tale-inspired flick whose wave of star power yields divine performances from Emily Blunt, Charlize Theron, Jessica Chastain and Chris Hemsworth reprising his titular role.

Heartbroken by a devastating betrayal, Freya (Blunt) flees her sister Ravenna’s (Theron) kingdom to establish her own as The Ice Queen. Her reign of terror over a frozen wonderland finds her waging epic wars against the kings of the North and rescuing kids to be trained as recruits for her army of elite huntsmen. That’s how she discovered Eric (Hemsworth) and Sara (Chastain), who would grow up to become “the best ones” in her army – but also rebels who fall in love and long for their freedom. But Freya will not hear of it and her ruthlessness sets into motion a sequence of events that puts Eric’s and Sara’s bond to the test.

Fast forward several years and Ravenna’s mirror (of “Mirror, mirror on the wall” fame) is up for grabs, and Freya wants it so badly she would do anything to get her hands on it. But, as they say, be careful what you wish for. 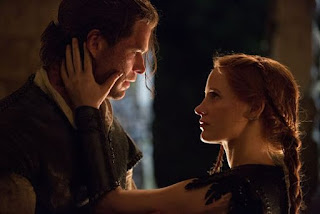 As far as origin stories go, Winter’s War (with its stunning cinematography and eye-popping 3D visuals) stands as a far superior product to 2014’s Snow White and the Huntsman, in which Twilight’s Kristen Stewart duked it out with Theron. This time around, it’s Theron and Blunt going at it, but their fighting is more passive-aggressive sisterly bitching. The real action surrounds Hemsworth and Chastain (who reveals yet another dimension to her gifts as a tough-as-nails butt-kickin’ heroine), playing the good guys battling some of the ugliest evil imaginable.

But for all the dark magic and malevolence that Winter’s War throws at us (not to mention some dazzling-ravishing costumes sported by the queens), there is enough heart and dignity in this bubbling pot to remind us that the most memorable fairy-tale narratives are full of bittersweet resonance that don’t always end in happily-ever-after. Tyrone’s Verdict: B+

> ALSO PLAYING THIS WEEKEND: Kevin Costner plays against type in the gritty action thriller Criminal, while Same Rockwell and Anna Kendrick are certified bad company in the comedy-drama Mr. Right.