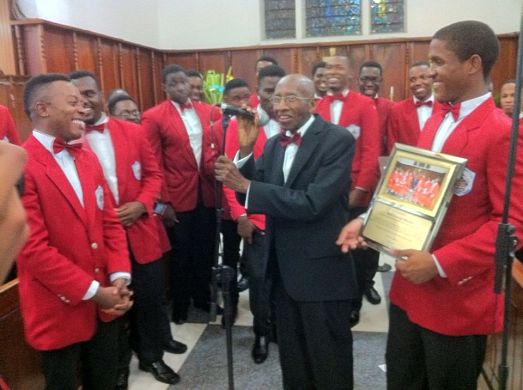 LAUGHING MATTER: The choristers enjoy a light moment as they honour their legendary leader.

“This is our first performance and we’re a little nervous.” Thus declared Noel Dexter, under whose directorship the Mona Campus Male Chorus gave their debut performance – ‘Songs of Joy & Inspiration’ – before a packed University Chapel on Sunday evening.

If the boys, smartly attired in red blazers and matching bow ties, white shirts and black pants, had any pre-performance jitters, those quickly ebbed away as they got into their act, delivering an ovation-worthy performance of sacred music, Negro spirituals, folk gems and popular standards – all shaken and stirred to produce a chocolate-y rich, soothing and stirring package.

Think of the University Singers meets Il Divo, with an extra shot of testosterone, and you’d come up with the Mona Campus Male Chorus, a 27-voice aggregation who look good and sound great. Tenors and baritones in glorious harmony.

Mr. Dexter and ace musician Djenne Greaves aside, they have an excellent leader in first tenor Shane Wright, a piano-playing secret weapon whose deft arrangements of a poignant gospel medley (including popular contemporary praise numbers) and the Mother Hen tribute “Because You Love Me” were as tuneful as they were rousing.

That said, there were numerous highlights on the brisk programme that benefitted from two key assets: brevity and balance. The selection of Negro spirituals was divine: reflective takes on “Standin’ In the Need of Prayer” and “Heab’n Heab’n” made way for Dexter’s iconic interpretation of “Psalm 23” and Barry Chevannes’ melodic, drum-assisted “Black Up.” Dr. Kathy Brown arranged for them a jaunty treatment of “Wonderful World, Beautiful People”, while Greaves, a maverick of the neo-modern musical arrangement, served up a medley of the Michael Jackson classics “Man in the Mirror” and “Will You Be There,” beautifully led by Wright as soloist.

But Wright, a son of Clarendon, was not the only star of the show, as soloists like his namesake Shawn Wright, who seems to have a thing for hard-hitting gospel, had his shining moment, as did Ricardo Johnson and Recardo Campbell, among others.

Overall, these talented male singers gave a memorable concert that made it clear that they are here to stay. Hugely enjoyable and full of flavor and powerhouse vocals, the group’s recital underscored the fact that choral music has always been rapturously alive at Mona, but the time has come for a new dimension – the all-male dimension.

> You’ve got male! Connect with the Mona Campus Male Chorus on Instagram at uwimona_malechorus.