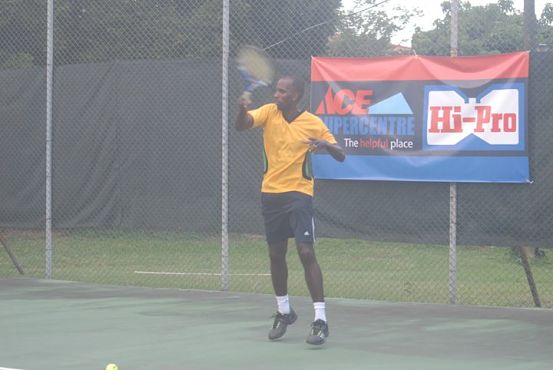 SMASH HIT: “It’s been a tough, arduous task,” Pagon says of building his career. (Below) winning the Scotia-sponsored Men's Pro 35 in 2015 and with wife, Hanna.

Playing two rigorous centre-court matches, mere hours apart, would prove taxing for some players, but for Dwayne Pagon, who is one of the stars on show at this week’s General Accident Tennis Open tournament, it’s a piece of cake. On this balmy Friday night, at New Kingston’s Liguanea Club, the 36-year-old veteran just won his keenly contested matchup against spirited opponent Matthew Rodriquez and is now awaiting his next challenger.

Pagon, who’s been playing professional tennis for well over a decade (almost 25 years in the sport in total), is used to digging deep to produce adrenaline-powered performances, which have brought his accolades locally and internationally. Career highlights? There are plenty to speak of. “I remember competing in the Swept Away Over-35 [tournament] one year, and I had to play like seven matches in one day. That was memorable. The overall experience, competing and stuff,” the sportsman, who stands at an imposing 6’ 5” recalls. Other special moments, he shares, include playing his first match at the collegiate level before going on to represent Team Jamaica for the first time in 2011.

Pagon has come a long way since, showing and proving, honing his on-court skills and, most importantly, flying up the rankings to the point where he is now ranked number two, behind top seed and tireless champion Damion Johnson. “It’s been a tough, arduous task,” Pagon says of building his career. “Spending a lot of hours on the court, playing frequently. But it is something I enjoy, the challenge and the competition. And it’s paying off, especially now in this latter part of my career.”

A country boy at heart, Pagon hails from St. Elizabeth but moved to Kingston at age 11, enrolling at Wolmer’s Boys for his secondary education. Tennis soon came calling, and he got introduced to important men in the sport like Llockett McGregor, who helped to mould him in those early years. The passion for the game soon took root, accompanying him all the way to Washington’s Howard University, where he studied Finance, graduating in 2004. It’s been on ever since.

Two decades is enough to make even the most committed athlete feel a bit jaded in the sport, but for Pagon his full-blown love affair with tennis still feels fresh. Like the best of them, he loves competing; he loves embarking on tough matches and coming out on top. Challenging himself brings a special kind of thrill. That’s why he wants to see tennis reach unprecedented heights locally. ‘We had a dormant period a couple of years ago, but it’s now on the up and up,” he says.

For Pagon, tennis in Jamaica is growing “slowly but surely,” but his primary concern rests with the new and future generation of players. “What I’m concerned about is seeing more kids come into the sport and stay in the sport. A lot of kids over the years have tried it, but then they quit,” he explains. “For the sport to grow, we need more young players from at least age six right up to 18, training and playing right through.” 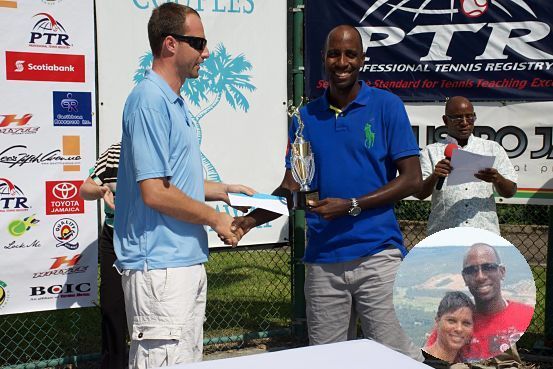 He’s doing his part to make this a reality, lending his time and expertise to Kingston's ADIN Tennis Academy, where he works with Immaculate Conception and American International School students, nurturing future champions. “That’s my passion. Even though I have my Finance degree I enjoy running a nice programme with over 100 kids from both locations,” he says, beaming. “It’s fun,” he adds, “being responsible for the development of juniors at the high school level.”

Fun also comes with raising an energetic two-year-old son, Zander, with wife of five years, Hanna, who also plays tennis – (that’s how they met!) – and looking forward to a future where tennis in Jamaica is on par with football and track-and-field. “I want to help grow the sport to becoming more of a household name in Jamaica. I want to bring some more junior champions to the world stage and get more kids scholarships to go overseas. That’s my aim,” says Pagon, now a bonafide triple threat in his own right – veteran player, dedicated coach and family man.