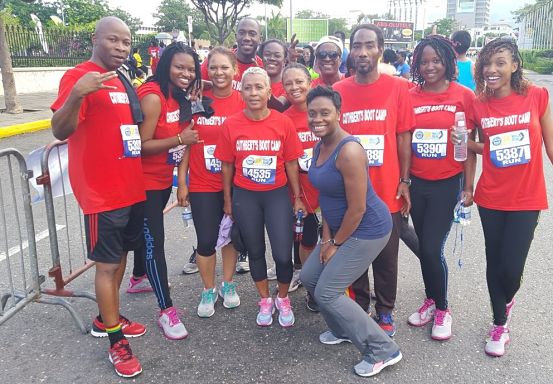 RACE READY: Juliet Cuthbert and her Boot Camp team took part in Saturday's 5K; (below) a family that befitted from last year's staging.

If Andrew Mahfood has his way, come 2017 some one hundred needy Jamaican families will be beneficiaries of brand new homes, courtesy of the Food for the Poor 5K, which had its second annual staging in New Kingston on Saturday morning.

Addressing the sizeable crowd that gathered post-race, the board chairman noted that this year the event raised $46.1 million (compared to $46.5 last year), which will facilitate the construction of 60 new homes (compared to the 64 which were built last year). But 100 homes is really the target. “Next year we’ll push for that 100 that we want to do. I know that it’s possible, and with your continued support and donations we’ll achieve that target,” Mahfood said. 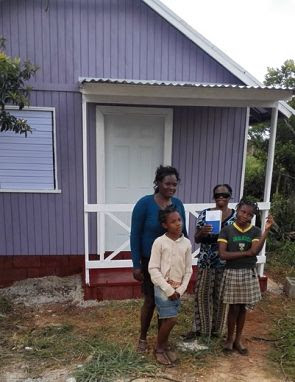 Event ambassadors Yohan Blake and Kamila McDonald were also in the mix on Saturday, rubbing shoulders with the sports gear-clad participants and posing for photo-ops. “I’ve had a relationship with this Food for the poor event from last year, and it’s a good thing for Jamaica,” Blake tells TALLAWAH. “And for the rest of my life I hope to be a part of it and helping the less fortunate, especially the mothers, who really need the support.”

According to Mahfood, the total team effort is what makes the Food for the Poor 5K and their philanthropic plans so successful. “What was nice about this year is that we were able to expand the number of people who are supporting us,” he told us in an interview afterwards.

Construction work on the 60 homes signed off for this year, he added, will commence within a month or so. “The more people give us – the one, one and the two, two – adds up. This is the second year and we’ve been able to have families come together because of the incredible work that this charity is doing. And in the years to come the plan is to increase the work and the number of families that we help.”