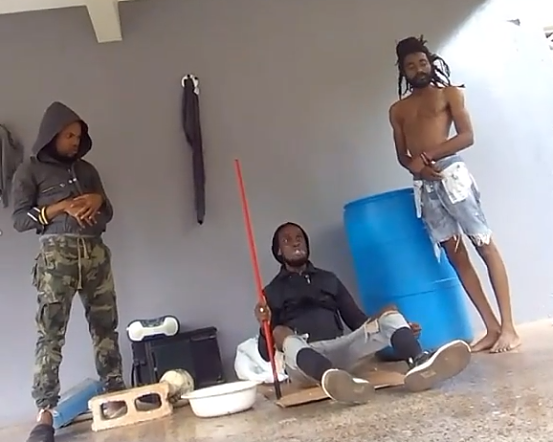 CONCRETE JUNGLE: Wilson, Shepherd and Creary sharing a scene from the play.

FROM Anthony Winkler’s The Lunatic to Basil Dawkins’ Guilt Trip, the concept of madness has come in for rigorous exploration in the annals of Jamaican folklore and entertainment. It gets the high-energy comedic treatment in Undercover Craziness, a new theatrical offering from emerging actor-writer-producer Rashiem Shepherd, who crafts a smart and funny story centred on a group of young, mentally disturbed (putting it mildly) rejects whose day-to-day antics at their street-side haunt not only brings the laughs but provokes some serious thought, engaging with the Big Themes of the mental health stigma, behaviour patterns, class and acceptance.

Kadeem Wilson (Charlie) and Everaldo Creary (Jones) lead the cast as a pair of homeless bredrin making life under a shed by a busy street-side. But, by all appearances, everything is not alright upstairs with these two, who bicker like an old married couple but share a strong fraternal bond in spite of their messy surroundings. They do some strange things.

Their regular existence is turned upside down with the arrival of another pair of specimen straight from the loony bin – the busybody Sheba (Jody-Ann Fearon) armed with her trusty notepad and pen, and stone-faced ‘drill sergeant’ Commander Gummy (Shepherd), who was “trained not to feel anything.” Appearing out of the blue to take over Charlie and Jones’ spot, these two may be up to something. Meanwhile,

Aisha Ritchie, as a nurse with serious control issues, and Oraine Meikle as a dream-chaser in suit and tie, round out the cast. As the audience soon comes to realize, everything is not as it seems.

The very small stage inside the Phoenix Theatre’s “second theatre” doesn’t give the actors much room to manoeuvre, but first-time director Kevin Sewell and the cast still manage to use the limited space available to pull us into the story and create the convincing illusion of a street-side spot, complete with bus stop, litter, entrances and exits.

Bringing Shepherd’s commendable script to life, the actors deliver believable performances, especially the experienced Creary and Wilson, whose natural comedic flair and excellent timing is offset by the more dramatic intensity of their supporting players – particularly Ritchie, who reminds us why some nurses are just plain scary.

All in all, Undercover Craziness more than lives up to its title, humorously tackling a taboo subject too often sideswept, while providing viewers with a bag of laughs via story from the pen of a promising Jamaican writer-producer. Tyrone’s Verdict: B