ON THE MOVE: Determination and persistence pay off for 2016 ‘Dynamites’, Overload Skankaz 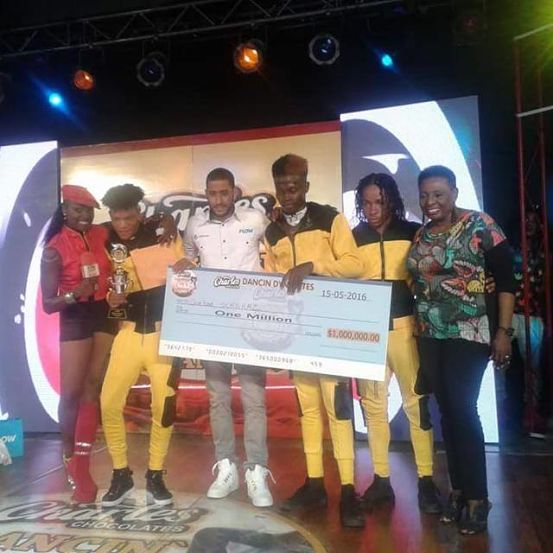 Romario Douglas, Teroy Dobson and Shamar Blake were swarmed by fans as they made their way through the thick crowd inside Jamaica College’s Karl Hendrickson Auditorium on Sunday night. The youthful, athletic and extremely fit dancers – who go by the stage name Overload Skankaz – were only moments earlier announced as the 2016 winners of Dancin’ Dynamites by showrunner Jennifer ‘Jenny Jenny’ Small. It’s a triumph that the guys had dreamed about and worked for, putting in the long hours of practice to perfect their routines.

Speaking with TALLAWAH on-stage following their big win, surrounded by flashing cameras, television crews lining up to interview them, and sponsors awaiting photo-ops, the young men made it clear that it was their commitment and fearlessness that gave them the edge over everybody else.

And it helped, too, that they’d entered the competition before (back in 2012) and got the boot before they could advance to the final round. That disappointment only fuelled their drive to go all the way this time around. “We practise very hard, and we do a lot of campaigning to get the votes because even when you give a solid performance, it’s the fans who have to vote to keep you in the competition. So we did a lot of campaigning,” explains Douglas who, along with his teammates, have learned to go the extra mile for what they want.

All in their early 20s, the lads hail from Linstead, where they are planning to stage a big celebration-themed bash to thank their loyal hometown supporters. “Once we get back there, that’s the plan,” says Blake. “They told us that we deserved to win, and the encouragement really motivated us. We didn’t want to let them down. They supported us all the way.”

Ever keen on taking advice from the judges and honing their movement skills, the dancers, who’ve been together since 2009, are convinced that their versatility and innovative streak set them apart from their opponents. Add to that a constant desire to push the boundaries of choreographic creativity. “We are versatile and we have technique. We work on our technique, and we listen to the judges,” shares Dobson.

Chief judge Orville Hall was very impressed, primarily, by their non-quitting attitude. “I like their determination. They entered before, and they didn’t do so well but they were able to bring that experience to the competition this year,” says Hall. “They didn’t start out as the strongest group, but over the weeks they improved, and tonight on the finals they brought their best. And that’s what champions do.”

Hall sees a bright future for Overload Skankaz. “For the last two, three years, people have been hearing the name Overload Skankaz, so now that they’ve won Dancin’ Dynamites, I expect them to get bigger in the years to come.”

For their part, the guys are putting their education first. The best part of being in the competition, they tell TALLAWAH, is getting the exposure. The best part of winning the competition is getting the scholarships. And that’s their main purpose for the prize money. “Nuff dancers win and don’t get to go to school,” Douglas remarks, “so this is an opportunity for us to do that.”