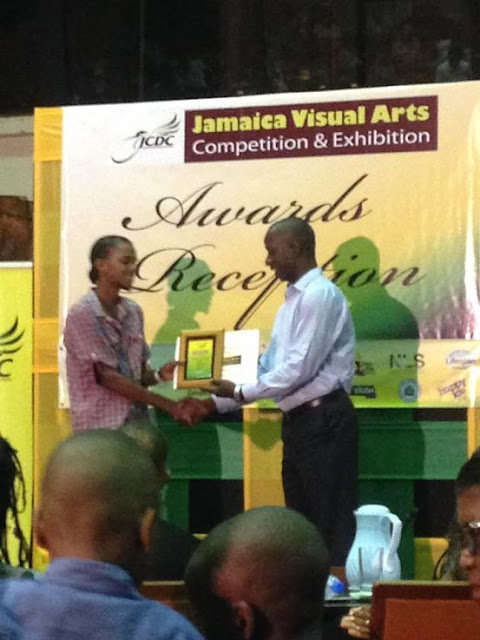 GETTING HIS DUE: Dontae Edwards accepting his silver award from the Tourism Enhancement Fund's Christopher Miller during Sunday's ceremony at the JCC.

By all accounts, there’s a vibrant arts programme in full throttle at the American International School of Kingston (AISK) that everybody needs to know about. For the third year in a row, the institution copped the coveted Summit Prize at the Jamaica Visual Arts Competition and Exhibition awards ceremony, for the richest prize haul by a group, club, school or individual.

AISK’s 23 students bagged four gold medals, three silver, 10 bronze and nine merit awards. The school was also presented with a $150,000 prize for its art department, and instructors Betty White and Denise Robinson, who made numerous trips to the stage on behalf of absent students, were named top teachers (sharing a $60,000 prize) for the third straight year. Standout student Zoë Brown, a fourth-time entrant, was a runner-up for the Promise Award from the judges. 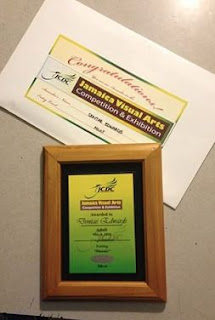 During Sunday’s lively afternoon ceremony, hosted by the Jamaica Conference Centre (under the auspices of the Jamaica Cultural Development Commission), high-schoolers hailing from as far as Manchester and St. James dominated the proceedings. The official Promise Award went to Campion College’s Kaylee Reynolds, who earned a trophy, art supplies, a DSLR camera and a scholarship to take part in the Edna Manley College’s summer programme. Herbert Morrison High took home the Artlympics Prize, valued at $100,000, for their art department.

The top adult entrants also got their just desserts. Nosbourne Lee, who teaches at Pembroke Hall High, was awarded the Art Live Prize (a 48-hour residency at Mountain View Avenue’s NLS). And as for the jury prizes, third place went to Winston Fourth; Patrick Planter was second; while Dane Hucey was the judges’ favourite. He will get his own website designed and free hosting for one year. Hucey, a gifted photographer and product of the Edna Manley College, also won the Studio Art Prize, which affords him a future solo exhibition at the EMC’s CAG[e] Gallery.

Most surprising of all, the competition’s Viewers’ Vote Prize (decided on by the general public) went to seven-year-old Nicola Jarrett, whose painting “A Sunny Interesting Day at the River” (a merit awardee) received a leading 233 votes to secure the $30,000 cash and a trophy.