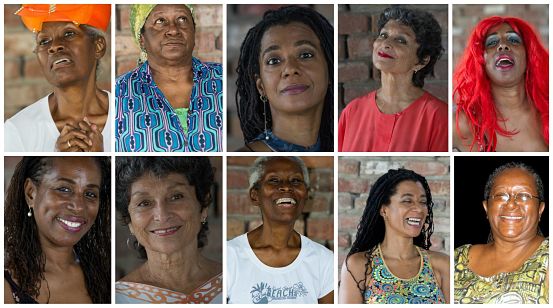 FACE VALUE: The production features a cast of accomplished actresses who heat up the stage.

It’s a dream team of collaborators, who’ve given audiences a solid show comprised of seven ‘movements’ (monologues and dramatic mini two-handers) that explore a range of oestrogen-laced situations and issues. Modern Jamaican womanhood thrust front and centre – the peaks and valleys, the beauty and ugliness – spun with no shortage of emotional heft and emotionally precise performances from five actresses in fine form.

That’s why though the production’s conclusion is a bit too bleak – not the optimistic spin we were anticipating – it takes nothing away from our overall enjoyment of the show. The writing is richly textured and wisely observant, some smart directorial choices augment the subtly stylish/minimalist staging, and the actresses bring their A-game.

Karen Harriott is a riot in “Her,” portraying a night worker sharing her rocky journey from abused teen to scorned grown woman turning to prostitution as a means to an end, enduring the slings and arrows that come with the territory. Barbara McCalla proves she’s still a force to be reckoned with, in “Bible Leaf,” as a God-fearing old woman (reclined over her washpan) lamenting the sting of slander and lies and bring-down.

Hilary Nicholson is magnificent in “Beauty” as fading belle Janice, who must have been a looker in her day, reflecting on aging and the ‘side effects’ that come with it. “Getting old is the easiest thing in the world,” she gushes in her best Cynthia McQueen voice. “No matter what you do it’s going to happen!”

Bertina McCaulay shines in a pair of contrasting sketches: the regret-spiked “White Lie” (“I never meant to hurt you; I just wanted a child of my own,” she pleads) and the vanity-laced “Teeth,” in which she plays an airheaded cougar with a full-blown obsession for men with perfect pearly whites.

Carol Lawes, meanwhile, has her no-nonsense moments as two steely matriarchs – in the intense mother-daughter face-off “Ruth”, with Harriott) and as a departed wife waiting for her beloved ‘Zekiel to join her in the afterlife, in “Dead Lef”, which unites all five actresses on stage and brings the curtains down on the show.

There’s lots of pain in Woman Tongue, gender politics, too; sex and sexuality, pride and dignity, family dynamics and, of course, the weight of womanhood. But Batson-Savage is neither an angry writer nor a sympathetic one. At its core, Woman Tongue simply bears the heart-and-mind concerns of a talented storyteller and modern Jamaican woman (gifted with a terrific cast and crew) who has something meaningful to say. Tyrone’s Verdict: B+