A GREAT START: Kingston on the Edge gets a rousing, arts-party kick-off at Redbones 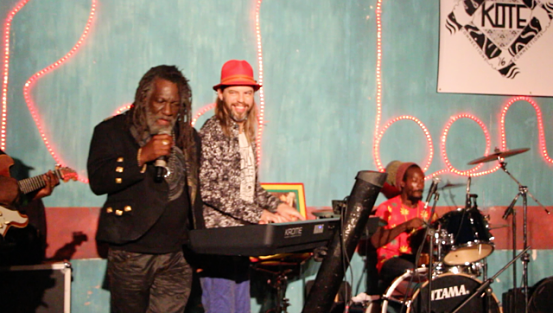 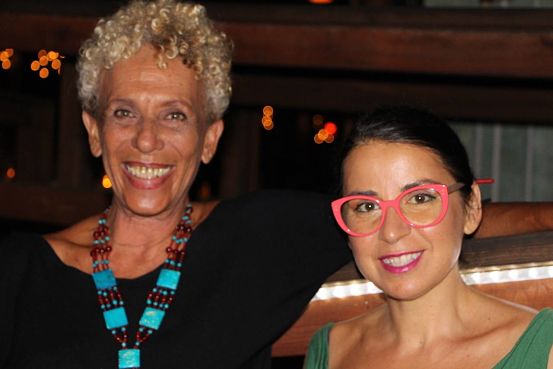 ON SET: Winston McAnuff and his band take centrestage; (below) artist Inansi, left, and a guest share a close-up.

From day one, Kingston on the Edge has been about that spirit of artistic expression, creative freedom and bringing together the best of our local visual artists and artisans, indie musicians and culture lovers for a week-and-a-half of glorious activities. Every year the organizers manage to put together an eclectic mix, and this year is certainly no exception. The signs of a fantastic festival in the making were all over the opening-night bash held at the Redbones Blue Café on Friday night.

Heading over to Redbones via Braemar Avenue, you were greeted by a sea of motor vehicles, so you knew the turnout was enormous. And the patrons certainly got their money’s worth.

While Oliver Hill took over the courtyard to screen his film La Rumba Me Llama (Rumba Calling), an exhaustive look at the evolution of Cuba’s rock-fusion music scene, dynamic fine-art talents like Richard Nattoo, Shaundel Campbell, Inansi, Shawn Ashman and Anji Worton had their works on display all over the property – eye-popping creations full of colour and power that drew viewers from all angles. Nattoo and Campbell put on quite a show as they engaged a portion of the attendees with their live-painting demonstrations.

Inside the Redbones Gallery, meanwhile, a fabulous little art show was in full swing. Titled “Snapshots” (running until June 25), it assembles a diverse group of talents working in mediums ranging from painting to sculpture to photography. While Jermaine Morgan’s hyperchromatic pieces grab your attention upon entering the creative space, our prize for the mastery of subtlety goes to Michael Steffen, a 39-year-old German photographer, whose year-long sojourn in Jamrock comes to an end in August.

Opening night closed on a roots-rockin-reggae high, with a batch of bands putting on a tuneful jam session with a difference. Best of the lot were vocalist Jermaine Blake and his One Drop Roots aggregation, who served up some hypnotic grooves (covers and original numbers); veterans Winston McAnuff and Fixi and the on-the-rise brothers of 6 Points, whose vibrant instrumentation is their forte; and The Free Willies, who are always in their element when they take to the Redbones stage.

> KOTE 2016 continues this weekend with events all over town. Here’s a look at the full schedule.