THE INSIDE WOMAN: US professor Baz Dreisinger sparks an open dialogue on the global prison system and restorative justice 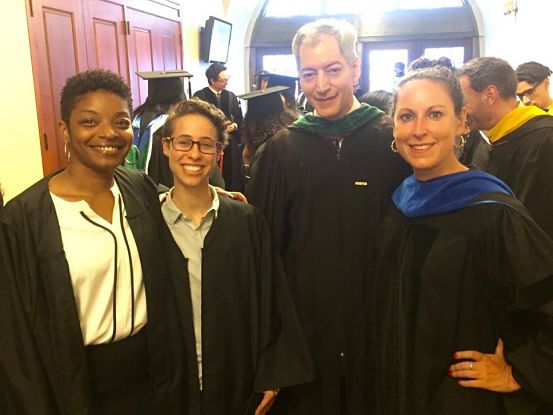 THE BELIEVERS: Dreisinger (right) with members of the Prison-to-College Pipeline faculty team; (below) reading from her book in Treasure Beach.

On the surface, Baz Dreisinger doesn’t strike you as the kind of woman who’d want to be caught dead inside a maximum-security penitentiary, let alone make it part of her life’s work to regularly visit prison inmates in a bid to help them (the incarcerated young men, in particular) prepare for life after The Big House. But after hearing this New York-based professor read (so eloquently) from her fascinating new book, Incarceration Nations: A Journey to Justice in Prisons Around the World, and share details (so passionately) of her exploits researching prisons from South Africa to Norway to Jamaica, you begin to see her in a whole new light: a petite, disarming academic with razor-sharp intellect but one who punches way above her weight. In a TALLAWAH exclusive interview, Dreisinger, 39, talks about how inequality fuels crime and fills prison cells, her 2013 trip to Jamaica’s General Penitentiary, and what she’s learned about the power of restorative justice.

TALLAWAH: Audience members were simply riveted by the excerpts you read from your book Incarceration Nations. Why did you want to write about the prison system?
Baz Dreisinger: I work in prisons in the US. I’m a professor but I started a programme called the Prison to College Pipeline, which is a university programme in prisons all around New York State. Through that programme students start university on the inside and then come to university on the outside. So I work with them when they’re in the prison and when they come home. I have been working as an educator in prisons for about a dozen years, so the book came out of the work that I do.

TALLAWAH: You noted that “extreme levels of inequality is what produces crime and fills prison cells.” Is that how you feel personally or is that assessment based on research findings?
Baz Dreisinger: It’s based on research. The most unequal societies globally have the most crime. Unequal in terms of economies, racial division. And there are many studies that show that the most unequal societies produce the most crime. Norway, which I read from, is an example of a very equal society, an almost wealthy socialist society, so it has much less crime. That, of course, is not the only factor but that is a big part of it.

TALLAWAH: There is a small chapter in your book about Jamaica. What did you find out?
Baz Dreisinger: It’s part of a larger chapter. I put Uganda and Jamaica together because I didn’t spend an extensive amount of time in the Jamaican prisons, but in Uganda I did. I did a creative writing workshop. In Jamaica, I went to GP in 2013 to look at a reggae programme, and I thought it was a great programme, but I felt like it’s a tiny little Band-Aid over a major wound.

TALLAWAH: What do you recommend that governments, like Jamaica’s, do to reduce their prison populations?
Baz Dreisinger: One of the ways is providing access to jobs and opportunities that prevent people from committing crimes in the first place. The other is creating conditions of confinement that are humane. And creating opportunities for when they come home. Now, I realize that creating jobs is not an easy thing to do, but that is certainly a big part. Jamaica is confounded by the issue of gang violence and rape, and by no means do I claim to be the expert on how we can fix things. I don’t have all the answers, but I think this kind of conversation is important to have.

TALLAWAH: Incarceration Nations sounds like a stay-up-all-night kind of read. What’s the response to the book been like so far?
Baz Dreisinger: The response has been great. Occasionally, I get emails from people all over the world that are very heartening and shows that people’s minds are being changed. The thing I’m most interested in is having the book as a way to galvanize governments to fix things. I’ve been able to talk to South Africa about that, and I’ll be in Kingston next Monday and Tuesday talking to people doing justice work.

TALLAWAH: So having done all that research and travelling, what does restorative justice mean to you now?
Baz Dreisinger: Restorative justice to me is what justice should look like, and it’s a victim-centred approach to justice. How can we bring the victim what he or she needs to feel restored and repaired? So I am very interested in systems that contribute reparations. It doesn’t have to be automatic but there are ways to make reparations for what has been done.

TALLAWAH: What subject are you intrigued to write about next?
Baz Dreisinger: I think there’s probably another justice book in me. I don’t know what it is but most likely it will be about the justice system. And beyond that I’m really interested in political comedy and holding a discourse on comedy and how it relates to politics globally. I’m toying with that idea.

> BUY THE BOOK! Order your copy of Incarceration Nations here.