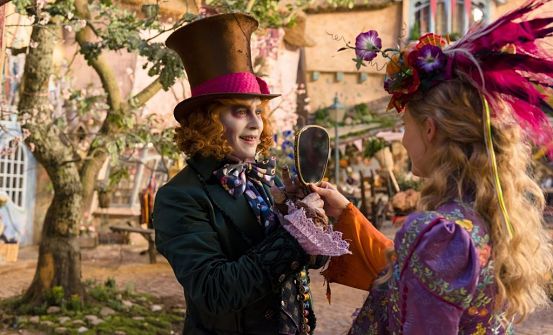 From the humorously macabre Sleepy Hollow to the delightfully left-of-field Edward Scissorhands to the deliciously outlandish Willy Wonka & the Chocolate Factory, Tim Burton’s movie-making orbit is the ideal adventureland for the open-minded moviegoer who likes his cinema with a tall glass of whimsy and dazzling art direction.

You’ll find plenty of that and more in Alice through the Looking Glass (directed by James Bobin, stepping in for Burton) that comes as a sequel of sorts to 2010’s box-office hit Alice in Wonderland. Though Wonderland is by far the superior product (full of wit, heart and ‘muchness’), Looking Glass has its moments.

It’s not the consistently entertaining spectacle we were anticipating but, for what it’s worth, it’s a riotous and eye-popping blend of special effects, haunting atmospherics and, quite fascinatingly, the ruthlessness of time.

To wit, Sacha Baron Cohen joins the party as Time, who presides over a golden empire of clocks and life spans. Alice (the fearless Mia Wasikowska, reprising her role) must outfox him if she’s to go back in history to save the family of her dear friend, Hatter (Johnny Depp as the colorful milliner who gets curiouser and curiouser) from the wrath of the vengeful Red Queen (Helena Bonham Carter). Racked by grief, Hatter is slowly fading away, and Alice has vowed to do everything in her power to bring him back from the brink.

Meanwhile, back in the human world of her native England, Alice’s family life is in tatters. Now a sea captain, she has to fight to preserve her father’s legacy in the face of her mother’s ‘frailty’ and the vindictiveness of Hamish (Leo Bill), now a pompous big-wig who is out to destroy her and have her institutionalized since she rejected his marriage proposal. How much can she handle? Chalk it up to the responsibilities of becoming a woman.

In Looking Glass, it seems everybody wants something and will wage war to get it, which lends the film some extra grit. But, overall, it’s the usual Burton ingredients that keep the fantasy afloat: humour, a vibrant colour palette, plus whimsy and a visual feast for days. Tyrone’s Verdict: B

Email ThisBlogThis!Share to TwitterShare to FacebookShare to Pinterest
Labels: At The Movies, Current Cinema, Film Review, Flick of the Week, Tim Burton