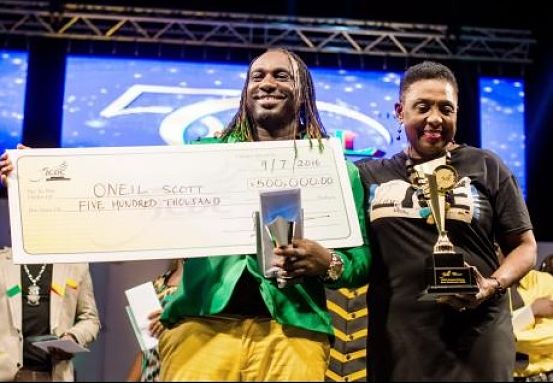 GETTING HIS DUE: The 39-yar-old singer-songwriter accepts his prizes from culture minister Olivia Grange.

When Culture minister Olivia ‘Babsy’ Grange appeared centrestage to present the Jamaica Festival Song championship trophy and half-a-million-dollar cheque to O’Neil ‘Nazzleman’ Scott at the jam-packed Ranny Williams Entertainment Centre on Saturday night, it was a crowning moment for a tireless competitor who as always the groomsman, never the groom.

A two-time finalist prior to entering the competition again, Scott finished third in 2012 and came oh-so-close to the title last year, placing second behind Lee-Roy ‘Ancient Priest’ Johnson (“Celebration Time”).

Buoyed by the multigenerational appeal of his catchy, infectious tune “No Weh Like Jamaica”, Scott, 39, emerged a favourite early on among this year’s Top 10, and on Saturday night he turned back a spirited challenge from teachers’ college graduate Reneive Fletcher (whose “Tun Up Di Music” took second place and the Voters Award) and vintage duo Mento Tones, who took third with “Bring Back Di Peace and Love.”

Nazzleman, who also won the Best Performance sectional prize, knows all too well the crushing feeling of defeat, so now that he’s won, putting his triumph in proper perspective is paramount to him. “Coming second and third really pushed me to think deeper and work harder,” admits he singer-songwriter, who has been writing and singing his own songs since age 15. Spending many of his early years in the biz as a vocalist with the popular band The Bare Essentials (touring extensively with them overseas) helped prepare him for the demands that come with the pursuit of solo stardom.

The JCDC and the Festival Song Competition (now in its 50th year), he says, have helped significantly, giving him a platform and boosting his confidence tremendously. “I think it’s a great competition that will always be on people’s minds because of the high standard and the tradition that is associated with it,” he tells TALLAWAH. “When I came third in 2012 that was Jamaica’s 50th anniversary. My song was called “Still Going Strong” and now the JCDC is using the title for the competition this year. So it’s awesome.”

With a Festival Song title now under his belt, Scott, who has also toured with Byron Lee and the Dragonnaires and cites Bob Marley and Beres Hammond among his influences, is now on a quest for mainstream success. “I hope I can get some radio play now,” he says. “A lot of people know me now, so it’s now for this song to hit the people dem.”

He has an EP, Get Ready, due for release this summer and upcoming shows across the island and in Miami. Where does he see himself in ten years’ time? Without hesitating, he responds, “Becoming a household name, impacting people and being respected for my work.”

> THE STORY BEHIND THE SONG: Nazzleman breaks down “No Weh Like Jamaica”

Nazzleman’s triumphant 2016 Festival Song “No Weh Like Jamaica” is a danceable, up-tempo delight that celebrates the myriad pleasures of our island in the sun. What led him to pen the sugarcane-sweet track? “After I came second last year I told myself that for my next song I need a catchy hook that would captivate the people right away,” he tells TALLAWAH. “And mi just get straight to the point: No weh like Jamaica. It sounds like a nursery rhyme. And you hear people say it all the time, ‘Jamaica is a nice, nice place despite this and that.’ So that was my inspiration.”