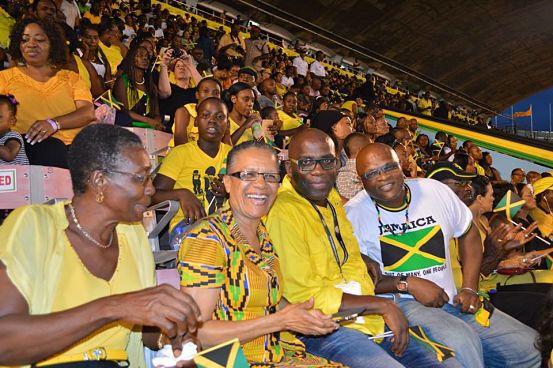 TRUE COLOURS: Jamaicans are expected to turn out in their numbers for the annual Emancipendence celebrations.

The Jamaica 54 Emancipendence celebrations, under the theme “Let’s Get Together and Feel Alright”, promise a raft of activities, steeped in tradition, innovation and festive energy, that guarantee merriment, lots of nostalgia and pure excitement.

Sunday, July 31, brings the National Thanksgiving Service, to be held at Windward Road’s Pentecostal Gospel Assembly, commencing at 11am. The Jamaica Gospel Song grand finale concert is also scheduled for that Sunday, starting at 7pm, at the Ranny Williams Entertainment Centre. And speaking of the Hope Road-based Centre, for the third year in a row, the venue will play host to the Independence Village, a sprawling day-to-night cultural hub (think food court, ground produce, live music), which will draw mammoth crowds daily.

Monday, August 1 (Emancipation Day), is scheduled for the grand opening of the Augus’ Mawnin’ Market (6am) and the Miss Jamaica Festival Queen coronation, which gets going at 8pm. On August 2, the Aunty Roachy Festival kicks off at noon, ahead of the usually action-packed Fashion Greets Music showcase, set for 8pm. The kaleidoscopic performing-arts extravaganza Mello Go Roun’ will be the highlight on August 3, starting at 8pm. The World Reggae Dance Championships, also starting at 8pm, is set for August 4.

Meanwhile, the avidly awaited ‘Reggae to Rio’ concert (a timely reminder that the summer belongs to Brazil) will be held on Friday, August 5. The spotlight then shifts to Independence Day, August 6, for the Independence Parade (King’s House, 9am) and the main event – the Grand Gala (inside the National Stadium, 6pm). For those who prefer the big-screen treatment, the Independence Village will host a viewing party, also starting at 6pm.

And there’s more to look forward to. On Sunday, August 14, the Louise Bennett Garden Theatre will host the Jamaica Poetry Festival, a feast of the written and spoken word, starting at 7pm. Marcus Garvey’s birthday, August 17, calls for a floral tribute at National Heroes Park at 8am. Lawrence Park, in his hometown of St. Ann’s Bay, will stage a civic ceremony, starting at 4pm.

Throughout the Emancipendence period, parish capitals will also put on a variety of activities and special events, ranging from parades and flag ceremonies to concerts and street dances.