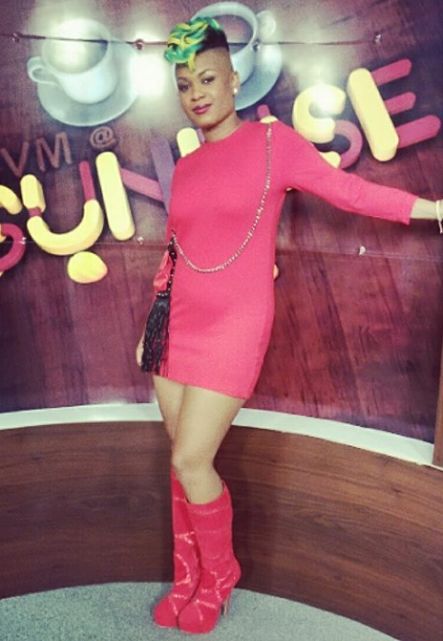 MAKING AN ENTRANCE: The rising star strikes a pose at the CVM Studios in Kingston; (below) with her background vocalists.

28-YEAR-OLD Abby-Gaye Dallas’ stage presence may exude the grrl-powered edginess of Pink and Tessanne Chin, but vocally she’s a roots-reggae powerhouse fast-tracking in the footsteps of her idols Marcia Griffiths and Tanya Stephens, for whom she has done background vocals. This Portmore native and School of Music graduate banks screen time these days as a co-host on CVM’s Ladies Views but establishing her identity as a young, dynamic musical force to be reckoned with is top priority number one. She’s well on her way. Having won the Jamaica Festival Song Competition and released and EP, she’s now crafting a special treat for her growing fanbase – her debut album, 12 Months of Summer. At last Saturday’s Festival Song finale at the Ranny Williams Entertainment Centre, TALLAWAH spent time with the rising star talking about achievements, ambition and stylish attitude.

TALLAWAH: It’s been almost five years since you won the Jamaica Festival Song Competition, becoming the youngest contestant (and third female) to do so. What’s been happening in your life since then?
Abby-Gaye Dallas: The journey since then has been mostly me finding the courage to believe in myself and push on to take my music to the next level. I’ve released an EP (last September’s Abby-Gaye Destined) and a mixtape, and now I plan to just keep on pushing. It has been a great ride so far, but the work is just getting started.

TALLAWAH: You introduced a couple of your original songs during your performance on the show earlier. Where do you usually find good songwriting material?
AGD: My material is mostly from everyday life, the relatable stuff. Everyday situations, man-and-woman relationships. But I’m about empowering women to be independent. I like to write about love because love is real. Almost any relatable subject or experience you can think of, I can write or sing about it.

TALLAWAH: Which brings me to my next question: as a singer-songwriter, how did you discover your life’s purpose?
AGD: I’ve been entering JCDC competitions since high school. In 2005, I won a scholarship to go to Edna Manley College [School of Music], and two years after graduating in 2010, I won the Festival Song competition. So I realized that this is what I’m supposed to be doing with my life. Edna Manley really prepares you for a life in the music industry. You learn about the roots of reggae and many different genres, and I’m classically trained as well. 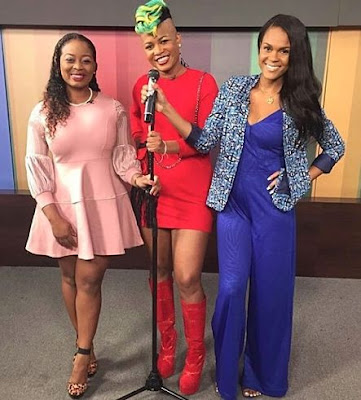 TALLAWAH: What major hurdles have you had to overcome? What valuable lessons have you learned along the way?
AGD: The most important thing is finding the right people to support you and believe in you and your talent, and I think I have found that. They help me face the challenges that come with the industry.

TALLAWAH: I have to ask about this punk-rock haircut, which is quite the dramatic head-turner.
AGD: I wanted a change, so I just cut it off, and people have been telling me that this is the look! Tonight I have it in the Jamaican colours, but you can expect to see a different colour next week. I’m loving it. Sometimes it’s red, blue, green. It depends on my mood.

TALLAWAH: Looking ahead, what do you see in your future personally, professionally and otherwise?
AGD: I definitely see myself becoming an international name, touring the world, doing movies, connecting with my fans, and just being the best that I can be.