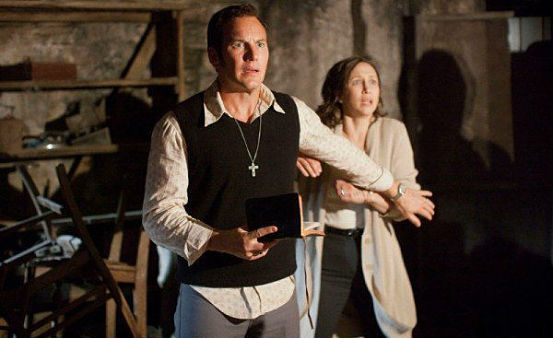 FRIGHT NIGHT: Wilson (Ed Warren) and Farmiga (Lorraine) encounter the toughest case of their careers in the spooky sequel.

Lorraine Warren (Vera Farmiga) thought she had experienced the worst of all there was to encounter in the realm of the paranormal and exorcism, having been in that line of work with her husband Ed (Patrick Wilson) for years. Together, they’ve rescued dozens of families from catastrophic ‘hauntings’. Now Lorraine has had enough.

But just as they’re about to turn the page, the husband-and-wife duo are summoned for their most diabolical case yet, which takes the US-based couple (who gained worldwide fame after working on the Amityville cases) all the way to Enfield, England, where the Hodgson family (struggling single mother Peggy and her four kids) desperately needs their expertise.

That’s how the story warms up in The Conjuring 2, a jolting and strongly acted sequel that draws on director James Wan’s penchant for authentic spooks and scares.

At the centre of this based-on-true-events saga is Janet Hodgson (Madison Wolfe), a mousy 11-year-old who took it hard when their father left. Ever since she consulted a spirit board (which she hid under her bed) for answers, strange occurrences have taken over their home, turning their lives upside down. Before long, their house becomes a demonic playground. Think flying furniture, levitation, child possession and foaming at the mouth. Peggy packs up the kids and flees next door, but their nightmare is far from over.

Upon investigating for themselves, Ed and Lorraine conclude that there’s much more to the story than meets the eye – a case (England’s Amityville, the press calls it) more complex and rattling than they’d anticipated.

As the movie progresses, you’ll find some holes in the plot and occasional lapses in logic, but make no mistake, The Conjuring 2 is a genuinely frightening flick. You feel for the poor mother (a sterling Frances O’Connor) and her terrified kids who will need serious trauma counselling to get back to normal.

The kids-in-mortal-danger technique helps to ratchet up the suspense and Wan elicits commendable performances from the young actors. Wilson (Little Children, The Phantom of the Opera) and Farmiga (Up in the Air) are ideally cast, playing Good Samaritans who seem out of their depth but never lose faith.

Overall, The Conjuring 2 is a solid addition to haunted house cinema. Intensely watchable, it’s packed with the requisite hair-raising stuff and a hefty dose of terror in the night. Tyrone’s Verdict: B+

Email ThisBlogThis!Share to TwitterShare to FacebookShare to Pinterest
Labels: At The Movies, Current Cinema, Film Review, Flick of the Week, Scary Movies