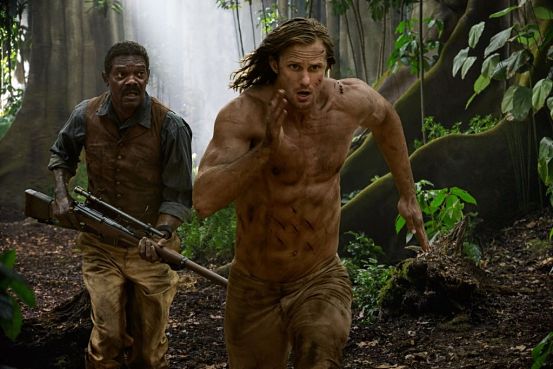 STAYING ALIVE: Skarsgård (right) and Jackson are on the run in this scene from the film; (below) Jackson, Robbie and Skarsgård.

We always knew that True Blood’s Eric Northman (who is about 1000 years old) was born to be wild and possessed some amazing skills. But who knew that they included swinging from sky-scraping trees and keeping pace with the animal rulers of the African jungle?

Versatile actor Alexander Skarsgård brings some serious finesse and fleet-footed agility to the role of a lifetime, as the titular hero in The Legend of Tarzan, David Yates’ visually stunning and memorably crafted take on the storybook classic that’s currently making big-budget noise at the box-office.

Then there’s the little matter of Skarsgård’s physique – ripped and chiseled to near-perfection – to go along with his towering stature and a leonine mane that cascades down to his shoulders. It’s quite a transformation. He’s not the most expressive actor around, but what he brings to the role is enough to leave a respectable impression.

How interesting that Yates’ Tarzan and Disney’s The Jungle Book remake – both full of thrilling 3D action – hit the cineplex within months of each other, taking audiences deep into the wild with well-known tales of young men, left in the jungle as babies to be raised by wild animals (wolves in the case of man-cub Mowgli; apes for monkey-man Tarzan). Their survival and heroic acts in the face of great odds still make for great storytelling.

Returning to The Congo from England with his beloved Jane, now his wife (a strong-willed Margot Robbie), and no-nonsense US envoy George Washington Williams (the ever charismatic Samuel L. Jackson), Tarzan (Mr. John Clayton III, thank you very much) reunites with the villagers who showed him kindness and the beasts who reared him after his father got himself killed. 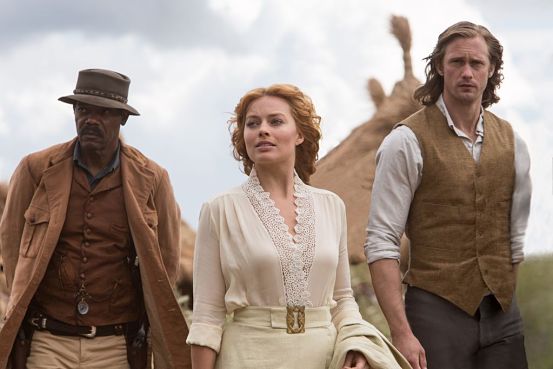 But mercenaries have taken over the country, enslaving the Congolese people under orders from the Belgian king. Christoph Waltz (Inglorious Basterds) brings the creeps as Leon Rom, a ruthless diamond hunter in suit and hat, who will fulfil his mission at whatever cost. He strikes a deal with a vengeful warlord (Djimon Hounsou), promising to deliver Tarzan to settle an old score. But when Jane is captured instead, it sets in motion a vicious battle that pitches foreigner against native, man against beast.

Appearing in almost every frame, Skarsgård tackles the physically demanding role like a trooper, and you root for him as he dives into the fight of his life – to liberate the enslaved and rescue his woman.

In short, The Legend of Tarzan is a highly entertaining mix of adrenaline and spectacle, which gives us a believable action hero in Skarsgård. The action unfolds at a zippy pace, but occasionally things slow down long enough to highlight themes of compassion, courage, and the elasticity of the human spirit. Tyrone’s Verdict: B+