THIS LAND IS MY LAND: JCDC’s Stephen Davidson cherishes his front-row seat in the island culture he adores 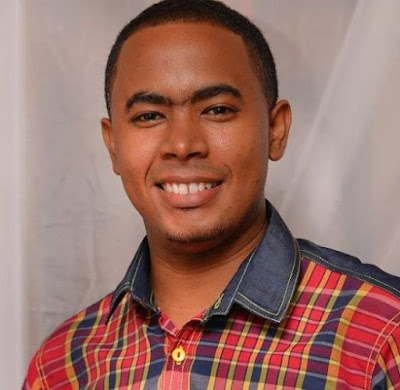 BIG IDEAS: "I can identify with the mission of the JCDC, which is to unearth, develop and nurture talent," says the PR guru, pictured below out-and-about and on the job.

Inside Stephen Davidson’s office at the Jamaica Cultural Development Commission (JCDC) premises on Phoenix Avenue in Kingston, you find a plethora of striking visuals, including a well-positioned wall photo of sprint icon Veronica Campbell-Brown (his all-time favourite athlete), a few pieces of inspired artistic imagery and a fascinating pencil sketch of Stephen himself, done by a budding young artist, we presume.

Before long your eyes come to rest on the work desk. It’s a busy space, to say the least, piled high with paperwork and an assortment of paraphernalia concerning the much-anticipated events to mark the 54th anniversary of Jamaica’s Independence, which kicks off next week. It’s an epic understatement to say that the planning and promotion of these upcoming events commands the lion’s share of Stephen’s time. After all, he is the Director of Marketing and Public Relations at the JCDC, for the past three years.

His days are filled with meetings, think-tank sessions (he just got back to office from a JIS workshop) and finding new and creative ways of making the annual celebrations appealing to the masses. They say it’s team work that makes the dream work, but you have to give singular credit where it’s due.

Stephen Davidson is a solid presence at the JCDC, an asset who seems to specialize in results and has been able to get his colleagues at the agency to embrace new ideas and a fresher approach to the business of preserving and promoting Jamaican culture. Thanks to the immense passion he brings to his work, the promotion and unfolding of JCDC events has been enveloped in more fervent buzz than in previous years. 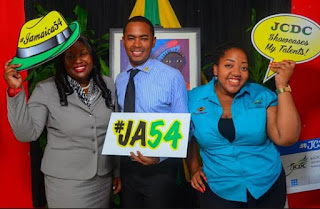 “My job is to promote what we do and to get Jamaicans involved. Our greatest resource is the people, so we take pride in providing a platform for them to not only showcase their talents but become better citizens, as well,” he explains, brightening up the room in his vivid yellow dress shirt (bearing the agency logo) and his garrulous energy. “Our aim is to always impact national development. It’s about transforming people’s lives through arts and culture, but we also look for ways to develop other skills as well.”

It helps, too, that he has an enormous love for the Jamaican culture at large. “I have a great love for all things Jamaican. And doing marketing and PR is my passion. So coming to the JCDC was perfect,” he emphasizes. “I look for companies that have similar core values, and I can identify with the mission of the JCDC, which is to unearth, develop and nurture talent. After all the planning and hard work, I love to see the end product. I am personally amazed, always, at what comes out at the end.”

By all accounts, this is the kind of work Stephen Davidson was destined to do. Born and raised in Kingston, he got a solid education at St. George’s College, where he stood out among his peers, even serving as valedictorian for the graduating class of 2000. A scholarship took him to the prestigious Lemoyne College in New York (for a Marketing and Applied Management degree), where the spirit of excellence and active involvement continued. An MBA from the Mona School of Business and Management was up next, followed by a five-year stint with the Victoria Mutual family, working in Marketing and Corporate Affairs. He’s been with the JCDC since February of 2013.

Though admittedly proud of his city-boy roots, Stephen (now 34) is quick to admit this: “What has happened with this job is it has taken me all over the island. It has allowed me to explore the island, practically driving myself.” He lets out a hearty laugh. This coming from a guy who, Jesuit Catholic education aside, cites such indelible childhood references as a firm Christian foundation, a battery radio tuned only to RJR FM, mischief-making brothers and a miracle-working single mother. 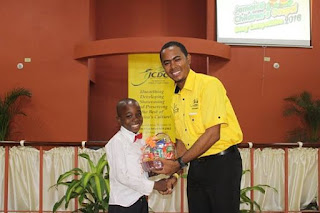 Just outside the door of Stephen’s office, the place is abuzz with activity, alive with excited voices and intermittent peals of laughter. After all, the opening of the Independence Village at the Ranny Williams Entertainment Centre is mere days away. Stephen is just as thrilled as his coworkers about what’s to come over the course of the next week and a half, as the nation observes Jamaica 54, under the theme, “Let’s Get Together and Feel Alright.”

“Jamaica going into the Olympics heightens the enthusiasm,” he says. To wit, an exciting addition to the Emancipendence roster is the ‘Reggae to Rio’ concert (paying tribute to reggae greats and putting the focus on reggae as a product to the world), which will feature live streaming of the Opening Ceremony in Rio de Janeiro.

It goes without saying that the fervour accompanying this year’s festivities will pale in comparison to what the JCDC has in store for next year. “This year we are really setting the stage for Jamaica 55,” says Stephen, who can hardly contain the excitement bubbling up inside him. “That’s something to look forward to.”

“I have a great love for all things Jamaican. And doing marketing and PR is my passion.”