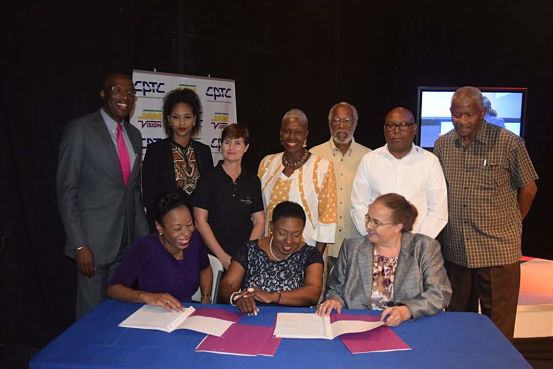 ALL ON BOARD: Campbell (second left, standing) joins the culture minister and JamVision family members for a photo-op; (below) putting her game face on.

At 29, Shakera Campbell is probably the youngest station manager in the island. For the past seven months, this daughter of St. Catherine, has been occupying “the hot seat” at the Creative Production and Training Centre (CPTC), tasked with taking the lead on the rebranding of JamVision (formerly CTV), their recently relaunched cable channel and one of the longest running indigenous channels in the English-speaking Caribbean.

But don’t be fooled by her young age. Miss Campbell comes to the post with a wealth of experience and the credentials to match, not to mention tonnes of ideas for turning the channel around and ushering it into a vibrant new era. “This station has been around for a long time, and we have a lot of great programmes. But you have to know where you’re coming from to know where you’re going,” she observes. “So while the mission is to rebrand the channel and make it more appealing to this generation, we still want to continue doing what works, which is highlighting the Jamaica that we all know and love.”

An alumna of St. Jago High, Camperdown High and UWI Mona’s CARIMAC School (where she easily stood out among her peers, graduating in 2008), Campbell has been there and done that. Since leaving CARIMAC, she has dabbled in everything from freelance TV production to creating commercials (for the likes of Wisynco) to shooting music videos (alongside the great Ras Kassa) to filming documentaries (sponsored by the UN and USAID), featuring subjects as tough as the last earthquake that devastated Haiti. Plus, she pays attention to what’s happening in her field internationally – the latest advances taking Hollywood and Broadway by storm.

When it comes to her day job and the local film scene, Campbell says the possibilities are endless, in spite of resource constraints. “The vision is there to deliver powerful programmes, powerful content that people want to see and hear. Right now, Jamaica is moving into a different ear. We have the people, we have the knowledge, and we are constantly improving our technology. We have very talented directors, but we need more sources of funding. And that needs to be addressed,” she says.

“For JamVision, the aim is to remain the number one cultural content provider in Jamaica.” Tradition, legacy and culture with a modern sheen.

Unsurprisingly, Campbell’s bosses at the CPTC remain confident that they made the right choice in bringing her on board. “She brings a fresh and different perspective to the team. Creative energy and commitment. And she’s part of the infusion of new talent that we’ve brought in. She’s a natural fit,” CEO Chantal Hylton-Tonnes tells TALLAWAH. “For this rebranding exercise, she’s the face of the brand, she’ll manage the station overall, and we have confidence in her in bringing to life the vision for the brand, to reach not just Jamaicans at home but globally.”