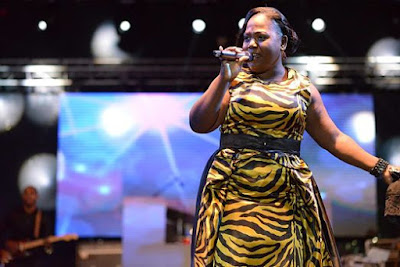 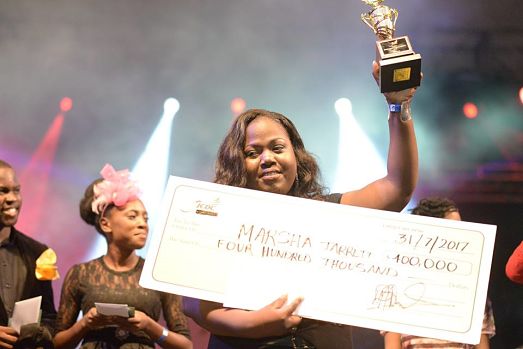 HAVING HER MOMENT: Jarrett performing her winning entry; (below) showing off her prizes.

Last year Diamara Neil-Walker won over the judges and the tough and tender crowd with her soulful power ballad “God Is.” Fast-forward a year later and another female vocal powerhouse has emerged winner of the National Gospel Song Competition, but thanks to the up-tempo allure and danceable appeal of her entry, “Send up the Praise”. It’s a song perfect for radio, and it certainly struck a chord with the judges and the large crowd at the Independence Village, Ranny Williams Entertainment Centre, on Sunday night.

Marsha Jarrett proved that, as a songwriter she knows how to pen a hit that packs message and musical punch in equal doses. For her effort, the plus-sized artiste with the big voice secured a hefty prize haul. In addition to a $400,000 cheque, Jarrett was singled out for four sectional prizes: Best Arrangement, the Social Media Award, Best Musicianship and Best Performance.

Given to the contestant who served as inspiration and a tower of strength to her fellow top ten finalists, Felicia Morrison-Williams (“Can You Reach Me?”) took home the Spirit of Praise Award, while the energetic male duo Vitalyte (“Banking in Jesus”) won Best Lyrics.

All ten finalists took home shiny commemorative plaques, courtesy of the JCDC (presented by Executive Director Dr. Delroy Gordon), while Jarrett’s top-two runners-up received cash awards. The third-place sum of $150,000 went to Sherdon Russell (“Jesus Lives In Me”) while the $250,000 prize for second place was presented to Morrison-Williams.

For Jarrett, her winning moment on Sunday night was both humbling and thrilling. “This has been a great learning experience and a blessing from God,” she told journalists backstage during the post-finale wrap-up. “I’m now looking forward to more great experiences.”