HEAD OF THE CLASS: Shebada Goes to School has snap, humour and some lively lessons 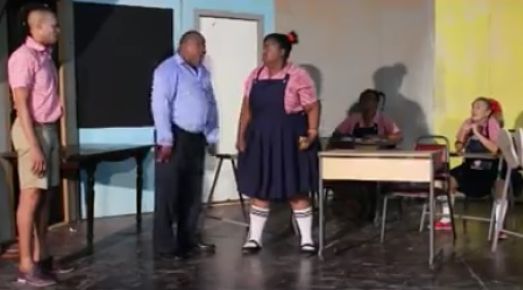 MAKING A SCENE: Action from the new comedy, now playing at the Phoenix Theatre.

The Jamaican education system comes in for razor-sharp skewering in Shebada Goes to School, the lively new comedy from RBT Productions, written and directed by Michael Holgate. You hear talk all the time about failing “all-age” schools full of bad pickney and hopeless academic cases, but in addition to shining the spotlight there, Holgate manages to highlight how students, teachers and socialization are equally at fault when it comes the blame game for the dismal performances.

The team of actors, led by Keith ‘Shebada’ Ramsey, have a field day, as they bring the show to vibrant life. The jokes don’t always score a bull’s-eye, but more often than not the punchlines and on-stage action is beyond funny. 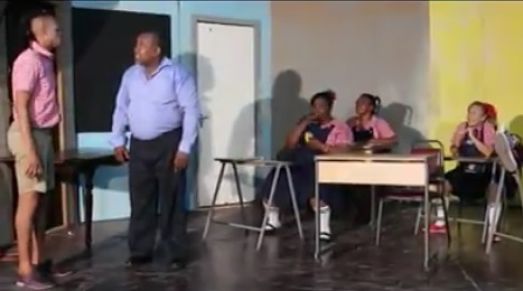 The story centres on a class of troublemakers. Ramsey (as Shibby) is the leader of this merry gang, which also includes budding gangster Trevor (Garfield Reid), livewire Suzie (Suzette Barrett), food lover Flooms (Taunia Flowers) and bookworm Babette (Monique Ellis). Their teacher, pulling double duty as the overworked principal, Mr. Blacks (Luke Ellington) has his work cut out for him to turn these mischievous dunces into bright sparks.

Things only grow more complicated when Mr. Brown, an education official with a vengeful streak, starts breathing down the principal’s neck, threatening to have the school shut down. Blacks vows to give his students an opportunity to prove themselves, thereby giving the school a fighting chance. But when the students’ plan to cheat by stealing their test papers in advance takes a gruesome turn, the future of the school and the lives of everyone involved fall into jeopardy. 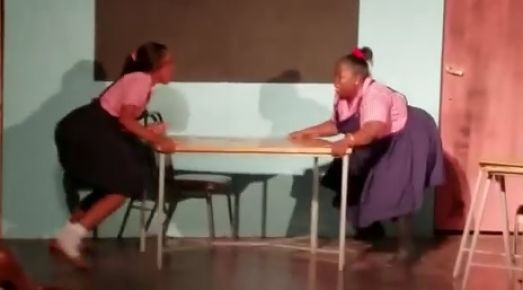 Technically, the show scores good marks for set design and lighting, as the action moves from the main classroom to the principal’s office, where the most outrageous scene takes place. After quite a few years, Ramsey can still make his command of the stage and the writer’s material seem effortless. His megawatt star power forces the rest of the cast to lift their game and keep up with him. And they respond zestily, for the most part, especially Barrett and Ellis, playing schoolgirls who are as cunning as they are cheeky.

Of course, the events unfolding in Shebada Goes to School are slices of far-fetched (sometimes over-the-top) fiction for entertainment, but you can’t help wondering, What if? And it’s this knack for intriguing his viewers that makes Holgate (Jonkanoo Jamboree, Curfew, Dead Lef’) such a crowd-pleasing storyteller and an important player in the contemporary Jamaican theatre landscape. Tyrone’s Verdict: B